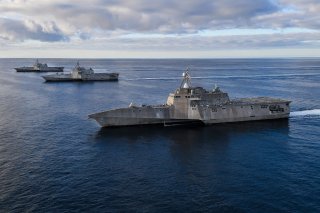 Several of the United States Navy’s Littoral Combat Ships (LCS) have been operating throughout the Pacific in recent months, despite the class’s many previous mechanical and operational troubles. In particular, the USS Jackson, USS Tulsa, and USS Charleston—all Independence-class littoral combat ships—have been able to deploy much more rapidly than in the past.

USNI News quoted a Navy Captain, who explained that the Navy has “had LCSs operate in the region from Sri Lanka to Guam to Japan and everywhere in between. They have been all over the region with brief stops for fuel in Singapore, the Philippines, Sri Lanka, Okinawa, and Palau.”

Both Littoral Combat Ship classes have proven to be accident-prone and have suffered seawater engine ingestion, sticky clutches, and damaged or broken driveshafts in the past. More recently, however, some of the LCS ships in the Pacific have been able to up operation tempos thanks to more extensive maintenance periods and better deployment of spare parts, eliminating or lowering the time between part replacements.

Furthermore, the Navy had “LCSs operate in surface action groups with destroyers from DESRON 15 (Destroyer Squadron 15), integrate with the America Expeditionary Strike Group (ESG) when DESRON 7 was the sea combat commander for the America ESG [and] integrate and conduct operations with the Carl Vinson Carrier Strike Group,” the Navy officer explained. “And you’ve seen the integration we have done with the Marine Corps among others.”

In particular, the Marines aboard are familiarizing themselves with the Naval Strike Missile (NSM), a Norwegian-made long-range anti-ship missile with which the Navy equips the Independence-class ships. In addition to high maneuverability, especially during its terminal flight phase, the Naval Strike Missile also possesses some stealth characteristics.

Though the NSM is a cornerstone of the Independence-class ships’ offensive firepower, the missile is increasingly seen within the Marine Corps as integral to their future capabilities as a force of mobile, amphibious, decentralized submarine and ship-hunters.

Most recently, the Corps evaluated a novel NSM setup that saw dual containerized NSMs mated to remote-controlled Joint Light Tactical Vehicle. The Marines would like to deploy the prototype platform, called the Navy-Marine Expeditionary Ship Interdiction System or NMESIS, on remote islands throughout the Pacific Ocean, denying enemy ships the use of land or a significant amount of surrounding sea.

Despite the Independence-class ship’s chequered past, better maintenance and parts logistics benefit not just the Navy but also the Marine Corps.