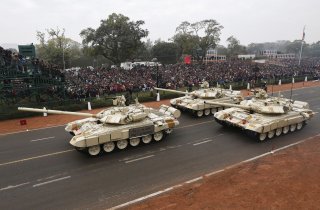 After dismissing the news that the Chinese People’s Liberation Army (PLA) employed microwave energy weapons against the troops stationed near the Line of Actual Control (LAC) earlier this year, the Indian Army announced that it has begun to employ “tunnel defenses” to pre-empt any “transgression” from the Chinese forces.

It was August 29–30 that Indian Army soldiers along with Special Front Force personnel occupied the position at the LAC south of Pangong Tso lake on the Kailash Range ridgeline for the first time since 1962. Despite some claims that the PLA used the microwave energy weapons to drive off the Indian forces, the Indian Army maintains that it not only has maintained its presence at that forward position, but it has taken a page from the Chinese military playbook by digging in.

The Hindustan Times reported that Indian military leaders have noted how the Chinese successfully used tunnel defenses against the Japanese forces during the Second Sino-Japanese War, while also how the Vietcong utilized similar tactics against American forces during the Second Indo-China War (Vietnam War). Tunneling efforts were also employed by the Japanese on Iwo Jima and other islands, while the North Koreans also used tunnels during the Korean War and has continued to build up its Tunnels of Aggression, which feature electrical lighting, weapon-storage and sleeping accommodations.

The PLA has also built tunnel shelters to house aircraft at Lhasa airbase and underground pens to house nuclear ballistic missile submarines in the Hainan Islands in the South China Sea.

The recent PLA tunnels, as well as those being constructed by the Indian Army, are much more than mere holes in the ground. The Indian Army has reportedly deployed large-diameter Hume-reinforced concrete pipes to support the tunnels, which can help shield the troops from an enemy attack. The reinforced pipes are reportedly six to eight feet in diameter and allow for easy troop movement underground from one location to another without being exposed to enemy fire.

Another benefit of the tunnel complex is that these can be heated and shelter the troops from the extreme cold as winter sets in. Both sides have moved in men and material, including armored vehicles that can operate in extreme conditions while the PLA forces have been equipped with prefabricated thermal shelters that include dormitories, washrooms, toilets and warehouses as well as heating equipment. These shelters can operate in temperatures up to minus 55 degrees Celsius and maintain an interior temperature around 15 degrees Celsius (approx. 60 degrees Fahrenheit).

The Indian Army lacks such amenities, and instead, its troops have been issued arctic tents that are designed to accommodate three to five soldiers with only basic kerosene-fuelled heaters to keep them warm. The tunnels could certainly be an improvement, provided they could be heated safely.

Even as de-escalation talks continue, it appears that the Indian Army is also continuing to dig in—but whether such fortifications will prove useful in a shooting war is another issue. The remote plains of the Ladakh Valley have been described as excellent tank country and the tunnels could be easily flanked like the Maginot Line on the French border with Germany. The soldiers holding out in the tunnels could be comfortably bypassed and surrounded.