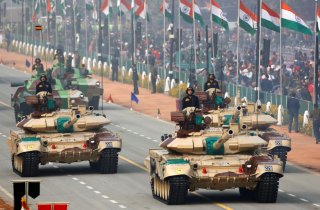 The West remains determined to punish Russia over its invasion of Ukraine. The European Union announced new sanctions in early May. Meanwhile, the U.S. Congress approved $40 billion in military aid to Ukraine, an action that follows Defense Secretary Lloyd Austin’s comment that the United States wanted to weaken Russia. However, not every state is behind the Western effort to isolate and punish Russia.

Besides China, India is one of the more prominent countries to not be on this train. So far, India has abstained from voting on multiple United Nations resolutions condemning Russia. Obviously, the United States does not want India to remain neutral over this conflict, with the White House expressing its displeasure over its neutral stance.

Before detailing how India is applying raison d'etat and its implications for the United States in the Indo-Pacific, it is important to explain where and how raison d'etat came to be. Cardinal Richelieu, the leading figure in the court of French king Louis XIII, was the original mastermind of raison d'etat. Richelieu applied raison d'etat during the Thirty Years’ War, which pitted Protestant kingdoms (namely in northern Europe) against the Catholic Habsburg Empire and Spain. With France being a steadfastly Catholic country, many expected the Ancien Régime to join the other Catholic kingdoms and put down Protestantism in Europe once and for all. However, Richelieu had other plans in mind. As Iskander Rehman describes, the infamous French clergyman recognized that the influence and power of the Habsburg Empire surrounded his country and that France was in a weaker position relative to the other Catholic countries. To get out of this predicament, Richelieu conducted diplomatic ventures with the Protestant countries, and funded proxy allies to fight the Catholic powers. As Henry Kissinger makes apparent in his book, Diplomacy, Richileau’s application of raison d'etat marked the end of the concept known as universalism and marked the beginning of the nation-state and the pursuit of national interests.

Today, India is pursuing a similar strategy to that of seventeenth-century France. While India is the world’s largest democracy, it is not on board with the West and other democratic countries in isolating Russia. However, India’s use of raison d'etat can be witnessed outside of the war in Ukraine. Look no further than India’s relations with Iran. While the United States continues to have rocky relations with the country—as the stalling attempts to revive the Iran nuclear deal have demonstrated—India maintains relatively warm relations with Iran. In the end, India will pursue its national interests, even if they differ from those of the United States.

However, there is an important case where India’s national interests overlap with those of the United States. Given that India practices raison d'etat in its foreign policy, it is likely to begin balancing against China, a rising hegemon. This is already occurring to some degree. While India and China continue to try to resolve their ongoing border dispute over the region of Ladakh, the tensions between both countries are unlikely to disappear in the near future. As Tanvi Madan makes clear, India’s decision to join the Quad signifies its intent to balance against China.

India’s raison d'etat has the potential to bring great fortune to the United States in its goal of containing China. Overall, India’s self-interests overlap with those of the United States. India is capable of providing for its own defense, increasing its defense spending “by 34 percent in the last decade” and demonstrating that it is capable of investing in its military to counter the rise of China. The presence of nuclear weapons within India and China means that even if China were to possess a significant conventional military advantage over India, it would be unable to conquer India outright. Barry Posen makes this point apparent in his book, Restraint. Given India’s ability to counter a rising China and the presence of nuclear weapons to prevent China from conquering India, the United States will be able to buck-pass balancing China to India.

Benjamin Giltner is a first-year graduate student at the George H.W. Bush School of Government and Public Service. He is pursuing a track in national security and diplomacy, as well as concentrations in international politics and grand strategy, Europe, and U.S. Defense Policy and Military Affairs. Benjamin is interested in issues pertaining to grand strategy, Europe, diplomacy, international politics, Russia, China, national security, and conflict resolution.