In India and Beyond, Pakistan Undermines Vaccine Internationalism 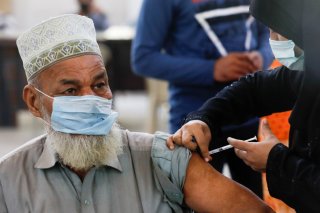 Over at The Liberal Patriot­, Peter Juul, a senior policy analyst at the Center for American Progress, penned an excellent essay about Covid-19 diplomacy and vaccine hesitancy. He correctly noted the diplomatic gains American provision of the Covid-19 vaccine provides. Indians, for example, are aware that when they faced a devastating surge, the United States scrambled its resources to provide both vaccines and oxygen. On this, the Biden administration—of which I am a frequent critic—deserves credit. Across the world, many governments have also become aware that the United States provides the gold standard for vaccines while China’s Covid-19 vaccines are little more effective than saline solution. In Iraq, for example, politicians vaccinated with Sinovac have revaccinated themselves with the British AstraZeneca vaccine or one of the American vaccines on the advice of local doctors who could detect no antibodies to SARS-CoV-2.

This is no doubt correct, but the problem of vaccine hesitancy is not simply the result of inadequate information or more general—if unfortunate—anti-vaccine sentiment. Rather, in some cases, groups apparently aligned with Pakistan’s Inter-Services Intelligence (ISI) agency appear to sabotage vaccination campaigns deliberately both to further sectarian discord and to deny any diplomatic gain their opponents’ goodwill vaccination diplomacy might achieve.

Consider the case of Sewa International USA. A Hindu faith-based charity that serves communities and individuals regardless of religion, ethnicity, or gender, Sewa has grown since its 2003 establishment in the United States to have nearly four dozen chapters across the country. It serves Hindus, Muslims, Christians, and Jews. Sewa has been especially active in both vaccination and fundraising campaigns in both the United States and India. The problem for Sewa began when, at the height of India’s second Covid-19 wave, then-Twitter CEO Jack Dorsey announced a $2.5 million donation to Sewa in order to help its anti-Covid efforts in India as part of a larger $15 million donation which also benefited Care and Aid India.

Within hours, the blogosphere erupted. The problem began when an activist named Pieter Friedrich (who also goes by the name Pieter Singh) posted an article to Medium, a self-publication platform, alleging that Sewa was the “welfare wing of RSS [Rashtriya Swayamsevak Sangh],” a Hindu paramilitary. That sparked follow-on articles in more mainstream publications amplifying the criticism.

Few considered either the weakness of Friedrich’s evidence or his militant associations. To discourage any who would assist Sewa’s efforts to combat Covid-19, Friedrich takes a decades-old and questionable allegation and transforms it into a broad castigation that suggests that the presence of a Sewa representative at a far broader community meeting—in which a Hindu nationalist was also present—makes all those groups affiliates of Hindu nationalist militias. By that logic, I am a member of the Taliban as several years ago, I attended a debate at the Herat Security Forum in which Taliban proxies were also present.

To get attention, Friedrich then announced a hunger strike (it did not last long beyond his announcement) to protest the donation, repeating the slanderous charge that Sewa was an affiliation of “a violent Hindu nationalist paramilitary.” In reality, Friedrich was the extremist. In both California and in South Asian circles, he is known primarily for gadfly efforts to cancel Mahatma Gandhi, accusing the Indian founding father of everything from incest to “white supremacy” to promoting Adolf Hitler. He is also active as executive secretary of the Sikh Information Centre in addition to his own Organization for Minorities of India. The two organizations are interlinked: Bhajan Singh Bhinder, founding director of the Sikh Information Centre, is also a director at the Organization for Minorities of India.

It is this connection that heightens suspicion that Friedrich’s anti-Sewa campaign is an information operation directed by Pakistani intelligence services. Earlier this year, Husain Haqqani, a former Pakistani ambassador to the United States who now directs South and Central Asian programs at the Hudson Institute, and his colleague Aparna Pande, director of the initiative on the future of India and South Asia, launched a study group report (in which I participated) entitled, “Pakistan’s Destabilization Playbook: Khalistan Separatist Activism Within the US.”

The report details not only how Pakistan’s Inter-Services Intelligence (ISI) has sought to promote Sikh separatism and terrorism in India, but also how it increasingly seeks to promote Sikh separatism and radicalism in the United States. More specifically, the report chronicled the growing relationship between “Stand with Kashmir,” which openly supports a number of jihadi activities, with both the Sikh Information Centre and the Organization for Minorities of India. It chronicles Bhinder’s radicalism. In a 2003 court filing, for example, the Drug Enforcement Agency alleged that Bhinder had attempted to “negotiate the purchase of assault weapons and shoulder-fired missiles for the Free Khalistan movement.” Bhinder also allegedly told an informant that he wanted “one ton of C-4 plastic explosive ‘to start with.’” That effort followed a Sikh terror campaign that wracked India in the 1980s and culminated in Indira Gandhi's assassination. Pakistan’s involvement in such extremism extends beyond supposition. Bhinder reportedly told undercover agents that he would transfer the weapons by yacht to Pakistan from where they would be smuggled into India. After the weapons deal fell through, Bhinder left California and stayed in Pakistan for six months.

Back to Covid-19. The Biden administration should continue to pursue its vaccine diplomacy. American efforts to immunize those in India and elsewhere against Covid-19 can buy the same goodwill and have the same lasting impact that George W. Bush-era efforts to counter HIV in Africa have had. At the same time, however, it is important not only to provide vaccines and education, but also to expose and crackdown on those, like Pakistan’s government, who would weaponize Covid-19 for cynical purposes as well as act against unregistered foreign agents who seek to obfuscate and undermine efforts domestically. Simply out, for Biden’s anti-Covid-19 efforts to work, it is time to call out the ISI and sanction Pakistan for actions that, quite literally, endanger the world.