India and Pakistan: Two Nations Always At the Brink of Nuclear War 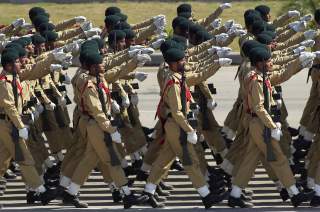 Unsurprisingly, the leaders of the two countries found themselves staring into the nuclear abyss because of a violent act in Kashmir, a disputed territory which had led to three conventional wars between the South Asian neighbors since 1947, the founding year of an independent India and Pakistan. As a result of the first of these in 1947 and 1948, India acquired about half of Kashmir, with Pakistan getting a third and the rest occupied later by China.

Kashmir, the root cause of enduring enmity

The Kashmir dispute dates back to the time when the British-ruled Indian subcontinent was divided into Hindu-majority India and Muslim-majority Pakistan, and indirectly ruled princely states were given the option of joining either one. In October 1947, the Hindu maharaja of Muslim-majority Kashmir signed an “instrument of accession” with India after Muslim tribal raiders from Pakistan invaded his realm.

The speedy arrival of Indian troops deprived the invaders of the capital city, Srinagar. Later, they battled regular Pakistani troops until a United Nations-brokered ceasefire on Jan. 1, 1949. The accession document required that Kashmiris be given an opportunity to choose between India and Pakistan once peace was restored. This has not happened yet, and there is no credible prospect of it taking place.

Fearing a defeat in such a plebiscite, given the pro-Pakistani sentiments prevalent among the territory’s majority Muslims, India found several ways of blocking U.N. attempts to hold one. New Delhi then conferred a special status on the part of Kashmir it controlled and held elections for its legislature, while Pakistan watched with trepidation.

In September 1965, when its verbal protests proved futile, Pakistan attempted to change the status quo through military force. It launched a war that once again ended in stalemate and another U.N.-sponsored truce, which required the warring parties to return to the 1949 ceasefire line.

A third armed conflict between the two neighbors followed in December 1971, resulting in Pakistan’s loss of its eastern wing, which became an independent Bangladesh. Soon after, Indian prime minister Indira Gandhi tried to convince Pakistani president Zulfikar Ali Bhutto to agree to transform the 460-mile-long ceasefire line in Kashmir (renamed the “Line of Control”) into an international border. Unwilling to give up his country’s demand for a plebiscite in all of pre-1947 Kashmir, Bhutto refused. So the stalemate continued.

During the military rule of Gen. Zia al Haq from 1977 to 1988, Pakistan initiated a policy of bleeding India with a thousand cuts by sponsoring terrorist actions both inside Indian Kashmir and elsewhere in the country. Delhi responded by bolstering its military presence in Kashmir and brutally repressing those of its inhabitants demanding a plebiscite or advocating separation from India, committing in the process large-scale human rights violations.

In order to stop infiltration by militants from Pakistani Kashmir, India built a double barrier of fencing 12-feet high with the space between planted with hundreds of land mines. Later, that barrier would be equipped as well with thermal imaging devices and motion sensors to help detect infiltrators. By the late 1990s, on one side of the Line of Control were 400,000 Indian soldiers and on the other 300,000 Pakistani troops. No wonder Pres. Bill Clinton called that border “the most dangerous place in the world.”

Today, with the addition of tactical nuclear weapons to the mix, it is far more so.

Kashmir, the toxic bone of contention

Even before Pakistan’s introduction of tactical nukes, tensions between the two neighbors were perilously high. Then suddenly, at the end of 2015, a flicker of a chance for the normalization of relations appeared. Indian prime minister Narendra Modi had a cordial meeting with his Pakistani counterpart, Nawaz Sharif, on the latter’s birthday, Dec. 25, in Lahore.

But that hope was dashed when, in the early hours of January 2nd, four heavily armed Pakistani terrorists managed to cross the international border in Punjab, wearing Indian army fatigues, and attacked an air force base in Pathankot. A daylong gun battle followed. By the time order was restored on Jan. 5, all the terrorists were dead, but so were seven Indian security personnel and one civilian.

The United Jihad Council, an umbrella organization of separatist militant groups in Kashmir, claimed credit for the attack. The Indian government, however, insisted that the operation had been masterminded by Masood Azhar, leader of the Pakistan-based Jaish-e Muhammad — the Army of Muhammad.

As before, Kashmir was the motivating drive for the anti-India militants. Mercifully, the attack in Pathankot turned out to be a minor event, insufficient to heighten the prospect of war, though it dissipated any goodwill generated by the Modi-Sharif meeting.

There is little doubt, however, that a repeat of the atrocity committed by Pakistani infiltrators in Mumbai in November 2008, leading to the death of 166 people and the burning of that city’s landmark Taj Mahal Hotel, could have consequences that would be dire indeed. The Indian doctrine calling for massive retaliation in response to a successful terrorist strike on that scale could mean the almost instantaneous implementation of its Cold Start strategy. That, in turn, would likely lead to Pakistan’s use of tactical nuclear weapons, thus opening up the real possibility of a full-blown nuclear holocaust with global consequences.

Beyond the long-running Kashmiri conundrum lies Pakistan’s primal fear of the much larger and more powerful India, and its loathing of India’s ambition to become the hegemonic power in South Asia. Irrespective of party labels, governments in New Delhi have pursued a muscular path on national security aimed at bolstering the country’s defense profile.

Overall, Indian leaders are resolved to prove that their country is entering what they fondly call “the age of aspiration.” When, in July 2009, Prime Minister Manmohan Singh officially launched a domestically built nuclear-powered ballistic missile submarine, the INS Arihant, it was hailed as a dramatic step in that direction. According to defense experts, that vessel was the first of its kind not to be built by one of the five recognized nuclear powers — the United States, Britain, China, France and Russia.

On the nuclear front in India, there was more to come. Last December, an investigation by the Washington-based Center for Public Integrity revealed that the Indian government was investing $100 million to build a top secret nuclear city spread over 13 square miles near the village of Challakere, 160 miles north of the southern city of Mysore.

When completed, possibly as early as 2017, it will be “the subcontinent’s largest military-run complex of nuclear centrifuges, atomic-research laboratories, and weapons- and aircraft-testing facilities.” Among the project’s aims is to expand the government’s nuclear research, to produce fuel for the country’s nuclear reactors and to help power its expanding fleet of nuclear submarines. It will be protected by a ring of garrisons, making the site a virtual military facility.

Another secret project, the Indian Rare Materials Plant near Mysore, is already in operation. It is a new nuclear enrichment complex that is feeding the country’s nuclear weapons programs, while laying the foundation for an ambitious project to create an arsenal of hydrogen bombs.

The overarching aim of these projects is to give India an extra stockpile of enriched uranium fuel that could be used in such future bombs. As a military site, the project at Challakere will not be open to inspection by the International Atomic Energy Agency or by Washington, since India’s 2008 nuclear agreement with the U.S. excludes access to military-related facilities.

These enterprises are directed by the office of the prime minister, who is charged with overseeing all atomic energy projects. India’s Atomic Energy Act and its Official Secrets Act place everything connected to the country’s nuclear program under wraps. In the past, those who tried to obtain a fuller picture of the Indian arsenal and the facilities that feed it have been bludgeoned to silence.

Little wonder then that a senior White House official was recently quoted as saying, “Even for us, details of the Indian program are always sketchy and hard facts thin on the ground.” He added, “Mysore is being constantly monitored, and we are constantly monitoring progress in Challakere.”

However, according to Gary Samore, a former Obama administration coordinator for arms control and weapons of mass destruction, “India intends to build thermonuclear weapons as part of its strategic deterrent against China. It is unclear, when India will realize this goal of a larger and more powerful arsenal, but they will.”

Once manufactured, there is nothing to stop India from deploying such weapons against Pakistan. “India is now developing very big bombs, hydrogen bombs that are city-busters,” said Pervez Hoodbhoy, a leading Pakistani nuclear and national security analyst. “It is not interested in … nuclear weapons for use on the battlefield; it is developing nuclear weapons for eliminating population centers.”

In other words, as the Kashmir dispute continues to fester, inducing periodic terrorist attacks on India and fueling the competition between New Delhi and Islamabad to outpace each other in the variety and size of their nuclear arsenals, the peril to South Asia in particular and the world at large only grows.