India and Russia's Missile Alliance: Why BrahMos Family of Missiles Could Be a Game-Changer 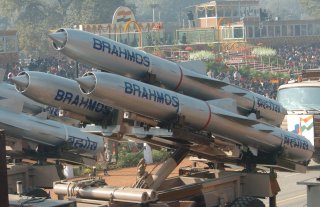 The BrahMos family of missiles are the product of a joint Indian-Russian venture. To date, the BrahMos program has developed a ramjet supersonic cruise missile, with ship- land-air-and submarine-launched variants.

The BrahMos design incorporates two fuel types. Solid propellant brings the missile to speed, at which point the propulsion is taken over by a liquid-fueled, air-breathing ramjet, bring the BrahMos close to Mach 3. Its unique nose shape contains the frontal cone portion of its ramjet and is reminiscent of both the MiG-21 and Su-7 jet fighters, which also incorporate a similar nosecone structure, located in the nose of the planes.

The ramjet is what makes the BrahMos missile unique in India’s arsenal. It is capable of very high speeds, topping out at Mach 3-Mach 3.5. The missile’s high speed makes it difficult to intercept.

The range is supposed to be limited to 290 kilometers, as both India and Russia are members of the Missile Technology Control Regime, a non-binding and informal arms export control regime that aims to limit missiles and missile systems to the under 500 kilograms (1,100 pounds)  payload range and under 300 kilometers (190 miles) range.

While the BrahMos is a fast missile, it’s successor, the BrahMos II, currently under development, could be a game-changer. BrahMos II is hypersonic — it travels in excess of Mach 5. But why is that a problem — why could a faster missile be so dangerous?

Hypersonic missiles reduce the reaction time of anti-ballistic missile protection and give the people or computers considerably less time to react to the threat. Hypersonic weapons are very maneuverable. Shooting them down has been compared to shooting a bullet with another bullet.

Brahmos II is powered by a scramjet engine, which is somewhat similar to a ramjet, but capable of much greater speeds, topping out at around Mach 6, although designers claim it could exceed that. According to Indian media reports, the BrahMos II is to undergo testing sometime this year, although the start date has been continuously pushed back.

An Indian government press release detailed one of the next goals of the BrahMos missile programs, “BrahMos supersonic cruise missile featuring Indian propulsion system, airframe, power supply and other major indigenous components, was successfully test-fired…With this successful mission, the indigenous content in the formidable weapon has reached a high value, thus bolstering India’s defense indigenization and the flagship ‘Make in India’ program.”

While initially reliant on Russian designs, especially pertinent to engines, India is hoping to domestically produce the majority of the components in the future, independent of Russian expertise.