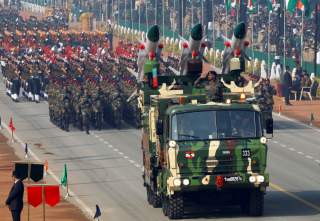 Among the big changes in the global strategic landscape since the Nuclear Non-Proliferation Treaty came into force in 1970 is the expansion of the nuclear club from five to nine. All five nuclear powers at that time were recognised as nuclear-weapon states by the NPT. Since then, four more countries have gate-crashed the exclusive nuclear club: Israel, India, Pakistan and North Korea.

The first three have been de facto nuclear-armed states for decades, and North Korea conducted its first nuclear test in 2006. But because of an Alice-in-Wonderland definition in the treaty—nuclear-weapon states are countries that nuclear-tested before 1 January 1967—they can’t be recognised as nuclear-weapon states. The legal straitjacket means the NPT can’t function as the normative framework for the nuclear policies of four of the world’s nine nuclear-armed states: a triumph of definitional purity over strategic reality.

The NPT is supplemented by several other treaties and arrangements that together constitute the broader non-proliferation regime. All are designed to reinforce the NPT standards. On the one hand, part of the NPT bargain is to help non-nuclear-weapon states in the peaceful applications of nuclear energy. On the other, the treaty prohibits any form of assistance to non-nuclear states in getting the bomb. Accordingly, assistance with peaceful applications of nuclear energy is subject to safeguards, and increasingly stringent export controls were instituted to eliminate the risk of nuclear trade being diverted into weapons programs.

There are four key arms control export arrangements. India’s 1974 nuclear test showed that reliance on the good faith of a recipient of nuclear assistance was misplaced. In response, the Nuclear Suppliers Group (NSG) was established in 1975 to tighten export procedures for sensitive nuclear materials and technology. The Australia Group was founded in 1985 as an informal forum for the harmonisation of export controls on proliferation-sensitive chemical and biological materials. The 1987 Missile Technology Control Regime targets missile and drone technology. And the 1996 Wassenaar Arrangement is a voluntary regime covering the export of conventional arms and dual-use technologies to problematic states and nonstate groups.

For 30 years, India was the most prominent critic of the NPT for having institutionalised nuclear apartheid and it denounced the export control arrangements as technology-denial regimes and supplier cartels. After the 1998 nuclear tests, India became a self-declared nuclear-weapon-possessing state. With uncharacteristic strategic realism, it calculated that the US was the only country that mattered in breaking out of the punitive measures imposed to curtail its nuclear ambitions. Once Washington relented, others would grudgingly follow and a pathway would open for India to integrate into the global nuclear order.

Sure enough, after the negotiation of a US–India civil nuclear agreement in 2008, India-specific exemptions followed from the International Atomic Energy Agency, the NSG and also many bilateral deals with other countries, including Australia.

India’s next target in the quest to normalise its global nuclear status was membership of the four export control regimes. India believes it is well qualified for all four given its firm commitment to non-proliferation, effective export controls and capacity to produce regime-regulated goods and technologies. Initially India sought entry into all four regimes as a package, but then diplomatic sense prevailed and India was accepted into the Missile Technology Control Regime, the Wassenaar Arrangement and the Australia Group over 2016–2018.

Negotiations for NSG membership, however, have proven protracted and contentious. The NSG members are divided—some strongly oppose admitting non-NPT countries; others demand stringent non-proliferation commitments as the price of membership; a third group wants to prioritise the development of technical and legal criteria before evaluating candidate countries’ applications against non-discriminatory criteria; and for the rest, the chief criterion is geopolitics.

As with any club, one could make a functionalist argument: all countries that are essential or relevant for realising the goals and implementing the purposes of a grouping should be members. The Comprehensive Nuclear-Test-Ban Treaty took this to an extreme in making the treaty’s entry into force conditional on every relevant country becoming a party, a uniquely self-destructive provision that has left it in a legal limbo. From this perspective, all existing and potential supplier states should be encouraged to join the NSG. Their participation would add legitimacy, promote information-sharing and best-practice exchange, and dampen incentives for illicit trade.

An alternative approach is to caution against rewarding rogue behaviour that should be punished. The rules-based global nuclear order can only be further damaged by opening the doors of the NSG to the very countries whose norm-defying actions led to its creation in the first place. If India does become a member of the NSG that was set up to check its nuclear ambitions, this will prove that history does irony.

The third pathway is to accept that sovereign states are fully within their rights to reject treaties they believe circumscribe their national security options. What is important instead is their actual non-proliferation behaviour: is it consistent with the norms of a responsible nuclear power? This argument is deployed by India’s advocates and backers to differentiate it from Pakistan.

However, putting aside the historical legacy of the notorious A.Q. Khan network, the recent non-proliferation records of India and Pakistan are broadly comparable. As Pakistan gets most of its nuclear supplies from China, its primary motivation in seeking NSG membership is related not to commercial considerations but status: parity with India. Because Pakistan can’t offer the lure of a nuclear market, others are less interested in backing its bid but instead oppose it based on lingering concerns over stability, volatility and state-sponsored jihadism.

Many would prefer a criteria-based decision rather than make yet another exception for India as a de facto US security partner in the China containment strategy. Unfortunately, the NSG’s politicisation means countries—applicants, backers and opponents—put a greater premium on its status value than its functional goals. In practice, the most common criterion has been bilateral relations based on geopolitical calculations.

But in truth, the push for and receptivity to India’s membership have been driven largely by India’s growing salience as an international actor. India’s rising global profile and diplomatic weight gave Washington some but not sufficient leverage in the campaign for NSG membership. But this means China, which is also Pakistan’s nuclear patron, remains opposed to India’s application and the consensus requirement has enabled China to derail India’s bid.

The NSG has taken the predictable path of caution to defer a final decision. No movement is likely until after this year’s NPT review conference from 27 April to 22 May. Meanwhile, a stalled economy will continue to weaken India’s candidacy.

Ramesh Thakur, a former UN assistant secretary-general, is emeritus professor at the Australian National University and director of its Centre for Nuclear Non-Proliferation and Disarmament.