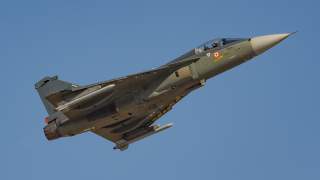 The Teja didn’t land on a carrier deck. In fact, it didn’t land at all. The aircraft was simply practicing grabbing a tailhook of an arresting wire from the ground.

Landing a plane on a carrier deck is incredibly hard. Besides the fact that the airstrip is moving, a plane has to slow down incredibly fast. This requires the pilot to snag a tailhook from an arresting wire, which slows the plane down in seconds. That was what was practiced on August 2, albeit from a ground position.

Despite this, a spokesperson for Hindustan Aeronautics Limited (HAL), which builds the plane, declared: “India has joined the select club of US, Europe, Russia and China having the capability of deck landing of fighter aircraft.”

In reality, this is just the first step on a long road. As The Hindustan Times, a popular Indian newspaper, pointed out: “This was the first in a series of rigorous tests that will be carried out before the fighter can be tested for actual flight deck operations, which could take more than a year.”

Nonetheless, it was a rare bit of good news for the much-beleaguered LCA. Proof enough of that was that in reporting the landing one Indian newspaper, The Deccan Herald, chose the headline “Tejas LCA for Navy returns from brinks of oblivion.”

Even the land-based version of the jet has been besieged by problems. In March of this year, news reports said Hindustan Aeronautics Limited had missed its target of producing twenty of the aircraft by an astonishing fourteen planes.

“We are not getting as many jets as we would like. By now the first Tejas squadron should have inducted 20 planes. Six planes can hardly be called a squadron,” an unnamed (most likely government) source told The Hindustan Times.

These delays have contributed to the increasingly dire straits the Indian Air Force finds itself in. The military has said that the country should ideally have about forty-two squadrons to deal with the threats posed by China and Pakistan. Each squadron is made up of eighteen to twenty planes.

Currently, the Indian Air Force has only thirty-two squadrons. Ten squadrons of older Russian planes are expected to be retired by 2022, and some estimates suggest that the Air Force will have only nineteen squadrons by 2027.

In the direst scenario, this could drop to sixteen squadrons—or roughly three hundred planes—by 2032. By contrast, the People’s Liberation Army Navy and Air Force are estimated to have 1,700 combat aircraft, although this includes the numbers from both services (rather than just the Air Force) and includes bombers, fighters and attack planes.

As I noted back in April, how bad things get for India will depend on many factors, including how many LCAs come online (and how quickly).

In addition, India's aircraft carrier program is undergoing its own challenges. Just last month, reports said that India would no longer commission its second indigenous aircraft carrier (IAC-2) in the 2030-2032 timeframe as it was previously scheduled to do.

According to a report in IHS Jane’s, the delay is “due to steadily declining budgets, technological hurdles, and, above all, enduring delays by the Ministry of Defence (MoD) in approving the program.”

This means India will only have one carrier for the vast majority of the foreseeable future, even though the Navy says it needs three. Since March 2017, when it decommissioned its second 23,900-ton Centaur-class carrier, the Indian Navy has only had one carrier, the 44,000-ton Kiev-class carrier INS Vikramaditya, a refurbished Soviet-era carrier.

As IHS Jane’s pointed out, INS Vikramaditya was supposed to be supplemented this year or next by India’s first indigenously built aircraft carrier. Not surprisingly, this has been pushed back considerably.