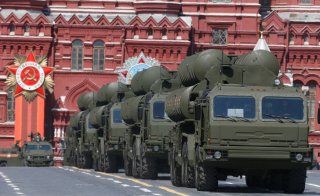 After developing strong relations with the Soviet Union during the Cold War, India continued its special relationship with Moscow even as it moved closer to the West. And despite the United States’ threats to sanction India for its decision to acquire the Russian S-400 air-defense system, New Delhi has also sought to maintain friendly relations with Washington.

Since Russia launched its unprovoked invasion of Ukraine, India has been the only major U.S. partner to not condemn the invasion. India also abstained from recent UN Security Council and General Assembly votes on the Russian invasion, arguing that sanctions are not a solution to the crisis. Instead, New Delhi called for the two warring sides to return to the diplomatic table.

Washington is now pushing New Delhi to "take a clear position" and end its balancing act.

"It's now time [for India] to further distance itself from Russia," said Donald Lu, a State Department official.

Lu suggested that the United States may reconsider its stance on waiving sanctions against India. Notably, Washington did not invoke the Countering America's Adversaries Through Sanctions Act (CAATSA) to sanction India in 2018 when it signed a $5.43 billion deal with Russia to purchase the S-400 missile defense system. "The Biden administration will consider CAATSA," warned Lu.

It seems that there are no good options for New Delhi. Russia has remained one of India's largest suppliers of arms in recent years. Around 60 percent of India's military hardware is now Russian-made, even as efforts to increase domestic production of weapons and equipment have been ramped up. India has also produced Russian-licensed hardware and small arms domestically.

"In the history of the world, there has been only one time that a country has transferred a nuclear submarine to another country on lease," Nandan Unnikrishnan, a distinguished fellow at the New Delhi-based Observer Research Foundation, told CBS News. "It's Russia that has given it to India. ... That's the level of strategic cooperation that no other country is going to give India."

India clearly has fears that the war could impact the sale of spare parts and other supplies for its Russian-origin equipment, including its T-90 tanks, BMP 2 armored personnel carriers, and MiG-29K fighter jets.

"Much of the planned capital procurements such as the Ka-226T utility helicopters were anyway put to the backseat after the government's directive on indigenization and stopping import of defence equipment in December last year," a senior government official told the Indian news outlet News18.com. "But what is of concern is the supply of spares for upgrade of several platforms such as T-90 tanks and MiG-29K fighters could be hit in the long term because of the conflict."

However, the delivery of the S-400 systems is not likely to be impacted by the war.

India's dependence on Russia could be reaching a turning point due to New Delhi’s tensions with Beijing. As Moscow and Beijing move closer together, an impasse between Moscow and New Delhi may develop. At the same time, New Delhi may seek to move closer to Washington and London to confront Chinese aggression in the Indo-Pacific.

India is attempting a delicate balancing act for now. The question is how long it can last.