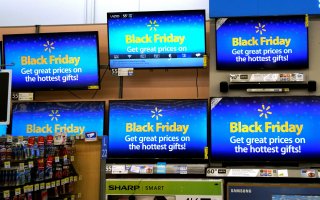 The price of new televisions has tended to fall over the years. Cutting-edge technology that may cost thousands of dollars may appear in Black Friday sales two or three years later for a fraction of the price.

The American Enterprise Institute’s Mark J. Perry often refers to what he calls “The Chart of the Century.” The chart, citing data from the Bureau of Labor Statistics, lists the cost of several goods and services and whether they have gotten more or less expensive over time. For the last several years, the product category closest to the bottom has been TVs.

Perry has argued that “the greater (lower) the degree of government involvement in the provision of a good or service the greater (lower) the price increases (decreases) over time.” According to a Bloomberg News story in 2018, “prices of goods subject to foreign competition—think toys and television sets—have tumbled over the past two decades as trade barriers have come down around the world.”

However, despite TVs sitting at the bottom of the chart, that doesn’t mean they haven’t been affected by inflation. In fact, there are signs that they are.

CNET reported this week that TV prices are the highest they have been in nine years, due to rising costs of parts and shipping.

"Pricing right now on TVs is the highest since at least 2012," says Stephen Baker, vice president of Industry Analysis at research firm NPD Group, told CNET. "Holiday pricing overall is likely to be at least $100 above normal. Last year the average price of a TV was $363 during the fourth quarter, which is fairly typical over the last few years. This year our forecast is for the average price to be approximately $500.”

CNET noted that the “average” is pulled down by many TVs being extremely cheap.

"Sales of TVs over $1,500 are at record levels, and sales of TVs 75-inch and above are performing much better than the overall market," Baker told the site. There should be deals this holiday season, therefore, on higher-end models.

Manufacturers also acknowledged that the TV industry is being affected by ongoing supply chain woes.

"We are seeing higher prices across all sizes and technologies compared to this time last year," Chris Larson, senior vice president for TCL North America, told CNET. "Semiconductors, copper, chemicals, glass, plastic, LCD panels and freight (both ocean and inland) are all up significantly.”