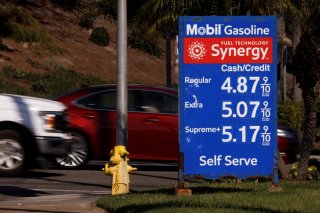 Russia is massing troops on the border with Ukraine, China is expanding its presence in the Indo-Pacific Region, North Korea is testing hypersonic weapons, and COVID-19 shows no signs of going away. Yet, for most Americans, the most worrisome threat is the record inflation that is increasing household expenses and eating into wages. The 7 percent increase in the inflation rate over the course of 2021 marked the largest annual increase in inflation in nearly four decades.

Americans saw prices for the basic necessities they rely on rise at a dramatic rate in 2021. While the government's efforts to provide stimulus aid and ultra-low interest rates motivated Americans to spend, supply chain woes resulted in such high demand for goods that prices increased at a record pace.

The U.S. Department of Labor reported on Wednesday that the core inflation rate, which excludes volatile goods such as food and gas, jumped by 5.5 percent in December, the highest in decades. According to the Associated Press, overall inflation rose 0.5 percent from November to December. The only good news was that the increase was down from 0.8 percent in October.

Economists have warned that because inflation pressures show no sign of easing, inflation is unlikely to fall back to pre-pandemic levels in the near future. While Americans are feeling it the most, the nineteen countries that use the euro had the largest increase in the annual inflation rate since the Euro was adopted.

Taxpayers Protection Alliance (TPA), a group that advocates on behalf of taxpayers and consumers, has slammed the Biden administration, calling inflation a hidden tax on the American people.

"Between the energy crisis, supply chain issues, concerns about the economy, and latest job reports, it's time for Washington to wake up," the TPA said in a statement. "They ought to reverse course and stop the reckless government spending packages, like Build Back Better, that are still being discussed in Congress. The Biden Administration should immediately drop tariffs across the board and Congress should rein in the administration's ability to unilaterally hike tariffs in the future."

The White House has argued that Build Back Better would reduce the cost of living, especially for many low-income families, and ease inflation over the long run. However, the key Democratic holdout, Sen. Joe Manchin (D-W.Va.), has continued to express concern that the bill would only increase inflation.

"Another month of record-breaking inflation. In just one year, there has been a 7 percent increase across the board, with many categories of goods and services well into the double digits," Patrick Hedger, executive director of Taxpayers Protection Alliance, said via an email. "Americans are feeling it each month when they go to buy necessities like groceries and gas. Small businesses are feeling the economic pinch when purchasing supplies. Economists predicted this, and unfortunately for the American people, they were right. Meanwhile, Democrats in Washington are desperate to blame anything else besides their policies for this predictable disaster."

The economy of 2022 is starting to look a lot like 1982’s economy, but it's not certain that Joe Biden can turn things around as President Reagan did.