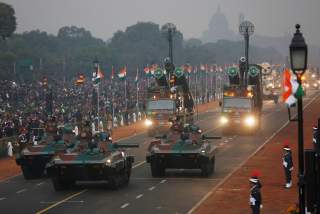 There are manifold reasons why India is presently incapable of executing the more aggressive versions of Cold Start. These range from the Indian Air Force’s doctrinal and organizational bias against close air support, to Pakistan’s ability to mobilize its forces much more rapidly than India, to the very low operational readiness rate of India’s armored forces, the extremely limited availability of self-propelled artillery, the absence of dedicated satellite bandwidth to conduct net-centric operations, to its subpar logistical network and the lack of personnel with the necessary initiative and flexibility to execute a maneuver doctrine. The biggest reason however, lies in the fact that no effort whatsoever had been made thus far to disaggregate its strike corps into smaller elements (integrated battle groups).

This last and most important requirement is what India may now be putting into place. Till last month’s army commanders conference, India’s January 2017 acknowledgement of the existence of Cold Start could have meant one of two things. One, was that General Bipin Rawat was simply referring to a more streamlined mobilization procedure, which would represent no doctrinal shift. Second, was that Cold Start referred to the Indian Army’s intention to undertake multiple, short notice, armored thrusts into Pakistan to seize and hold territory, something that would be a real doctrinal shift. Now, however, it is clear that India is envisaging the latter as well.

As on date, the fighting segment of the Indian Army’s 1.2 million active duty personnel are principally found in forty divisions distributed across fourteen corps (Strike, Holding or Pivot). These forty divisions comprise eighteen infantry divisions, twelve mountain divisions, four RAPID’s (Reorganized Army Plains Infantry Division), three armored and three artillery divisions. Each corps comprises about three divisions, and each division, has roughly three brigades under it. Lt Gen. Harcharanjit Singh Panag (retired) correctly notes that with all of India’s potential adversaries being nuclear weapon armed states, the probability of a full-scale decisive conventional war is quite low. The twenty-first century requires a more agile army. A clean break is required from existing brigades and divisions as tailor made, all arms battle groups are more suited for the kind of wars that India is likely to be engaged in. With IBG’s, the Indian Army is looking to integrate in peacetime to save the time wasted in integrating when going for combat.

Some light has already been shed on the likely number and nature of these composite fighting units. The IBG’s that India is now contemplating raising may be considered lighter divisions or heavier brigades. The Indian Army is considering two kinds of IBG’s. Smaller ones for the mountains facing China and larger ones for the plains facing Pakistan. Eight to ten IBG’s are being contemplated for use against Pakistan. Each IBG could have four to six battalions of infantry and armored units, two to three artillery regiments, an engineers unit, an integrated signals unit and dedicated integral logistics (eight thousand to ten thousand troops). The Indian Army has been clear however that not every corps, division or brigade will be replaced by an Integrated Battle Group. The terrain, threat perception and options available to the enemy will be critical factors for determining whether or not an IBG will replace the present structure.

To be sure, there is a long road ahead before IBG’s are operationalized. Presently, the concept itself is expected to be finalized in six to eight months. Following that, the same IBG’s will be tested. Plenty of doctrinal testing through simulated wargaming and field exercises should be expected before India actually fields these formations.

Praveen Swami had remarked, “every Indian Prime Minister has faced this impossible challenge: how to punish the Pakistan Army’s sponsorship of terrorism, but ensure victory doesn’t come at a price the country cannot afford.” Should it commit to operationalizing this concept, India may finally have an answer.

Himanil Raina is a B.A., LL.B. (Hons.) graduate from the NALSAR University of Law and is presently a Research Associate at the National Maritime Foundation, India.