Integration or Crisis? In the Age of Migration, Those are the Only Choices 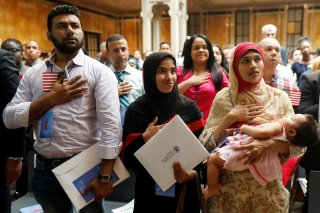 Rich countries are facing many problems, but two of the most concerning are the aging and shrinking of their labor forces and the crush of migrants at their borders. Neither problem can be solved on its own.

The typical approach to the aging and shrinking of the labor force is to offer incentives for women to have more children. Yet many countries’ efforts in this regard have proven to be fools' errands. The most expensive and comprehensive family support programs, such as those of France, Sweden, and Russia, have barely moved the total fertility of women back to two children per household. The global trend, from East Asia to Western Europe, is dipping well below that level.

The reason is simple: In a world where women can receive professional educations and have careers—and where childcare, education, and housing are all very expensive—having three or four children seems far too costly, both in terms of actual expenses and foregone careers. Note that to reach a fertility level of three children per woman, for every woman that chooses to have just one child, two other women must have at least four—a ratio that simply will not materialize. Unless we somehow recreate the conditions that underlaid the baby boom—cheap housing in new suburbs, free higher education at state schools, and a near-complete ban on women doing anything other than homemaking—the four-child household will be as much a relic of the past as the Upstairs/Downstairs world of lifelong domestic service. Conditions have changed; the past will not return.

When considering the migrant crisis, it’s vital to recognize that the volume of those seeking to move from poorer countries to richer ones will not decline. Whether people are migrating for asylum or just better jobs, numbers will only grow. First, the working-age populations of Africa, the Middle East, and Asia—now the largest immigrant sources for Europe and North America—will increase by over one billion people in the next thirty years. Second, as poor countries grow richer, they provide education and savings that fuel desires to move abroad. Based on the historical trend that three percent of the population becomes international migrants, we can expect that thirty-three million people will seek to move, many of them to the rich world, in the next three decades.

Climate change and political conflicts will likely increase this number as their effects hit the most vulnerable regions. However, a million migrants per year is a very manageable number. From 1985 to 2010, the United States alone took in that many migrants each year. For the combined populations of the United States, Canada, Australia, and the European Union, one million migrants per year represent less than one-tenth of one percent of new population—not even enough to make up for many countries’ loss of life due to Covid-19 and not enough to offset the decline in population due to low fertility.

The notion that taking in more migrants will somehow “flood” the rich world with strangers is simply a myth; it only appears real because, when a sudden crisis occurs in poor countries like the major drought in Central America or the war in Syria and converges with the absence of institutions needed to manage sudden spikes in migrant flows, we see the specter of thousands of people lining up at border barriers, creating a stirring, if only short-term, humanitarian crisis. In fact, while such episodes foster a fear of migration, the reality is that these episodes are generally followed by a swift integration of those admitted—even the million migrants who entered Germany between 2015 and 2016 were followed by a return to normalcy. If most countries permitted a larger, more regular flow of migrants and had procedures and capacity to deal with sudden spikes—as are predictable given the sporadic nature of conflict and climate-driven disasters—then disorder would not manifest.

The reality is that, in the big picture, admitting more legal migrants would help resolve both the aging and shrinking of labor forces and rushes of migrants at borders. To be clear, in simple demographic terms, even admitting one million legal migrants to the rich world each year will only slow, not reverse, population aging and decline, especially as migrants are no longer having very large families of their own but instead rapidly adopt the fertility norms of their destination country. But what matters more than simple numbers for the future prosperity of rich nations is their productivity— and that is where immigrants and their families shine.

During the period from 1985 to 2010, when the U.S. population grew by one million migrants per year, the United States won the Cold War, launched the semiconductor and communications revolutions, and developed the social media companies that have taken over the world. Many of these world-leading enterprises depended on immigrants and their children, whether as founders or skilled workers. And while skilled immigrants drive innovation and new firms, unskilled immigrants provide the essential workforce for the child and elder care necessary to enable women to maximally contribute to the economy. Immigrants are also essential for crucial bottleneck jobs like truck drivers that native workers no longer want, but whose absence can choke the economy.

In short, providing safe, legal, and larger-scale pathways to immigration will solve critical problems. Opposing immigration, though offered as a solution, is a false idol—doing so only ensures that the very real problems of population aging and border crises will continue to worsen.