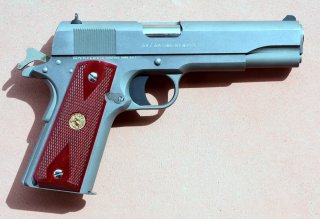 The 1911A1’s record is mixed. The handgun certainly is powerful, and it’s 7+1 ammunition capacity allows for more firepower than a revolver. Its reputation as a bucking “hand cannon” is often overstated as the 1911A1’s heavy steel frame tends to soak up much recoil.