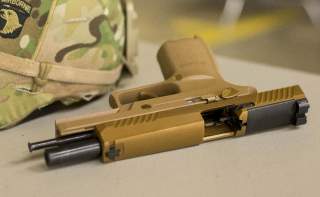 Earlier this year, soldiers with the Army’s 101st Airborne Division were the first to receive the services’ new high-tech 9mm pistol engineered to give dismounted infantry a vastly increased ability to fight and close with an enemy in caves, tunnels, crawl spaces, houses and other close quarter combat scenarios.

“You can close with the enemy in close quarter combat and engage the enemy with one hand. It is tough to do this with the M9,” Lt. Col. Martin O’Donnell, spokesman for the 101st Airborne, told reporters earlier this year.

“With this weapon, you can change quickly from right hand to left hand. If you are shooting something that is not comfortable on your hand and can't get a comfortable grip, it is not as accurate,” Sgt. 1st Class Andrew Flynn, 101st Division Master Gunner, said earlier this year.

This first appeared in Warrior Maven several months ago.