Introducing E-Skins: The Next Generation Technology for Medical Devices 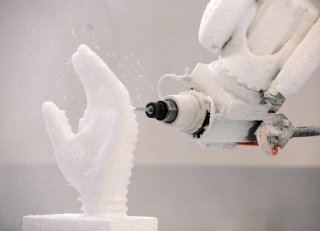 The Research Brief is a short take about interesting academic work.

Skin is the largest organ of the human body. It conveys a lot of information, including temperature, pressure, pleasure and pain. Electronic skin (e-skin) mimics the properties of biological skin. Recently developed e-skins are capable of wirelessly monitoring physiological signals. They could play a crucial role in the next generation of robotics and medical devices.

My lab at Caltech is interested in studying human biology and monitoring human health by using advanced bioelectronic devices. The e-skin we have developed not only analyzes the chemical and molecular composition of human sweat, it’s fully powered by chemicals in sweat.

Existing e-skins and wearable devices primarily focus on monitoring physiological parameters like heart rate and can’t assess health information at the molecular level. Moreover, they typically require batteries to power them, and the batteries need to be recharged frequently.

How we do this work

The approach we take to harvesting energy from the human body is based on biofuel cells. Fuel cells convert chemical energy to electricity. The biofuel cells we developed for our e-skin convert the lactic acid in human sweat to electricity. In addition to the biofuel cells, the e-skin contains biosensors that can analyze metabolic information like glucose, urea and pH levels, to monitor for diabetes, ischaemia another health conditions, as well as physical information like skin temperature. The e-skin, made of soft materials and attached to a person’s skin, performs real-time biosensing, powered solely by sweat.

Previously developed wearable biofuel cells don’t produce a lot of power and aren’t very stable. We greatly improved the power output and stability of the biofuel cells by using novel nanomaterials for the cell’s two electrodes. The cathode of our biofuel cell is composed of a mesh of carbon nanotubes decorated with nanoparticles containing platinum and cobalt. The anode is a nanocomposite material that contains an enzyme that breaks down lactic acid.

The biofuel cells can generate a continuous, stable output as high as several milliwatts per square centimeter over multiple days in human sweat. That’s enough to power the biosensors as well as wireless communication. We demonstrated our e-skin by monitoring glucose, pH, ammonium ions and urea levels in studies using human subjects. We also used our e-skin as a human-machine interface to control the motion of a robotic arm and a prosthetic leg.

We plan to further improve the power output of the biofuel cells and integrate different biosensors. The development of fully self-powered e-skin opens the door to numerous robotic and wearable health care possibilities. Wearable sensor arrays could be used for health monitoring, early disease diagnosis and potentially nutritional intervention. In addition, self-powered e-skin could be used to design and optimize next generation prosthetics.