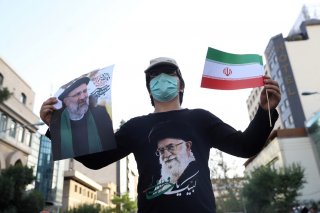 With the Iranian election this week likely to strengthen the ultraconservative clerics who rule in Tehran, it does afford time for America to seriously reconsider the terms of the failing nuclear deal currently being renegotiated.

Raisi, who has been subject to U.S. sanctions over his role in the mass executions of thousands of political prisoners in 1988, is widely perceived as a candidate who will strengthen Khamenei’s leadership, further erode the human rights situation in Iran, and prioritize the removal of U.S. sanctions while retaining Iran’s strategic ambiguity surrounding its nuclear program.

In the short term at least, this will lead to a continuation of Iran’s own “maximum pressure” campaign against the United States and Britain. Attacks on Coalition bases in Iraq by Iranian proxies in the Popular Mobilization Forces (PMF) will likely continue to increase pressure on the United States to remove sanctions.

Under Raisi, who is a hardliner in sharp contrast to Iran’s sitting moderate President Hassan Rouhani, Tehran will almost certainly resume development of its nuclear program, in continued violations of the Joint Comprehensive Plan of Action (JCPOA). The failing nuclear deal is currently still under renegotiation, with both Washington and Tehran desperate for a new deal, but for different reasons.

However, despite the short-term uncertainty that the Iranian elections will cast on ongoing nuclear talks, Washington should take time to reconsider its interests, rather than trying to rush through a new JCPOA with all the structural limitations that it possesses. For instance, the head of the International Atomic Energy Agency (IAEA), Rafael Grossi, stated that reviving the nuclear deal will have to wait until after a new Iranian government is formed. Rafael added that a deal required political will from all sides.

Despite Iran's presidential elections taking place this Friday, the new president is not expected to name his cabinet until mid-August. This gives Washington, and the remaining signatories to the JCPOA (especially the European countries) some breathing space to take stock of the situation which currently faces them.

Iran has consistently violated its commitments under the JCPOA since the deal was implemented in January 2016. Only four weeks after implementation day, the IAEA reported that Iran had produced almost a whole ton of heavy water more than it was permitted to. Since then, the Islamic Revolutionary Guards Corps’ (IRGC) foreign operations wing, the Quds Force, have continued to arm, finance, support, and coordinate various regional terrorist organizations and proxy militias, including Hamas, Hezbollah, the Houthis, and the Iraqi PMF to conduct attacks against Western targets and American and British allies, including against Israel and Saudi Arabia.

Iran has continually breached its commitments under the JCPOA over the last twelve months; enriching uranium far past the limits set appropriate for civilians use, installing new centrifuges, and developing new research and development sites—all contrary to the JCPOA, but with little to no consequences.

Instead, Washington is eager to revive the same nuclear framework which has allowed this nuclear proliferation and wider regional security instability and aggression to occur.

Grossi is indeed correct that any revival of the nuclear deal must now wait until after Iran’s new government is formed. However, as the supreme leader retains all executive power regarding political and diplomatic decisions, and with the clear frontrunner for Friday’s election being an ultraconservative, the outcome of Iran’s “election” will hardly make any difference in Iranian politics.

Washington and its allies in Europe, particularly Britain, must now use this time before a new Iranian government is formed to studiously reconsider getting back into bed with a regime that has consistently violated the terms of a nuclear deal that has only emboldened and strengthened the ultraconservatives who rule Iran.

Robert Clark is a Defence Fellow at the Henry Jackson Society in London. Prior to this, he served in the British Army for thirteen years including tours of Iraq and Afghanistan.