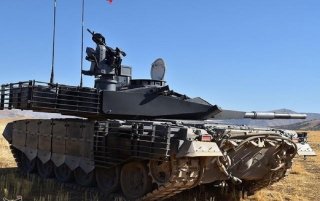 Although Iran claims its Karrar MBT is 100% a ground-up Iranian design, it is likely largely based on the Soviet Union’s T-72 design. This would make sense, as Iran has a number of T-72s that could be showcased as something new.

At first glance, the Karrar is strikingly similar to the Russian T-90 Main Battle Tank. The Karrar appears to have some type of Explosive-Reactive Armor (ERA) panels on both the turret and the hull, as does the T-90.

The Iranian Tasnim news agency posted photos of the Karrar on Twitter and said that Iran was preparing to accept 800 of the “home-made” tanks in 2018, although no specific timeline was given.

The locally produced tank is rumored to be kitted out with a whole suite of modern components, including an “electro-optical fire control system, a laser rangefinder, ballistic computer and could fire at both stable and mobile targets in day or night.”

Similar to nearly all main battle tanks, the Karrar has a remote weapons station on top of the turret that.

Besides the T-90-esque flying saucer turret, the Karrar likely shares the same main gun as the T-90, or could be something quite similar — the 125-millimeter main gun is larger than the M1 Abrams main gun, by 5 millimeters, and is thought to be smoothbore.

Notably, Iran maintains a fleet of T-72s that also have a 125 millimeter autoloading smoothbore main gun, with fume extractor — possibly an indication that their new “Iranian” design leans at least somewhat on previous Soviet designs. Either way, the T-72 is a capable, if somewhat aged platform.

In spite of the close similarities between the Karrar and the T-90, Iran claims that its newest tank in 100% Iranian made--although that seems nearly impossible. Iran possesses a fleet of Soviet/Russian T-72s. Upgrades to their turrets, main guns, and armor would be much more feasible than a new, ground-up tank design.

Back in 2016, there was talk of a Russian-Iran T-90 tank deal that has since fallen through. This may be in part to a lack of money on the Iranian side with which to buy Russian armor, as well as a desire to get away from relying totally on foreign arms and arms designs in favor of domestic production.

The Russian state-owned media outlet, Sputnik, ran a headline that said about as much shortly after the Karrar was revealed. According to their source, Iran has extensive experience with the T-72, and still has “some 500 units in service.”

The Zulfiqar 3 tank is another supposedly domestic-production that is heavily reliant on American, British, and Russian designs. And, like the Zulfiqar, the Karrar is probably reliant on other foreign designs.