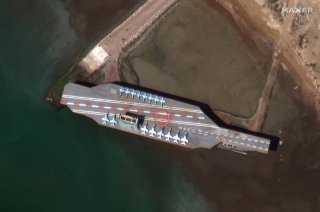 The IRGC is arguably Iran’s premier force. They specialized in asymmetric warfare and are also the protectors of Iran’s ballistic missiles. In addition, the IRGC conducts patrols in and around the Persian Gulf and the Strait of Hormuz.

They field a number of powerful weapons, including some reverse-engineered copies of American missiles. In addition, perhaps one of the IRGC’s most dangerous assets is their mine-laying capability, which can be done by both combat divers and by several classes of small Iranian submarines.

The highlight of the exercise was the USS Nimitz—or rather a scaled-down mock-up of the American nuclear-powered aircraft carrier. The model, probably a large barge covered in scaffolding, was meant to look quite real. It even had model airplanes on the deck that displayed American markings.

Video of the war game showed a helicopter launching one or two missiles at the Nimitz mock-up. Iranian gunboats swarmed around the carrier as well. Both the missile strike and the IRGC swarm tactics look easy and well-executed in the video, though it should be pointed out that a carrier would never sail alone without an escort. Moreover, the model is considerably smaller than the supercarrier is in real life and was also at anchor. After several missile strikes, the carrier mock-up began to list and eventually sank into the shallow Iranian water.

It isn’t the first time that the Revolutionary Guard Corps has blown up the USS Nimitz-model. During the 2015 Great Prophet 9 war games, the IRGC blew up the same aircraft carrier-barge, though it was evidently repaired for this year’s games. This most recent sinking, however, is likely a bit of a mistake.

The imagery of the carrier post-sinking shows it in about fourteen meters of water, which is about forty-five feet deep. The Nimitz model is quite close to Bandar Abbas, one of Iran’s largest and most important ports. Thanks to the relatively shallow water where the model sank, it may present a serious hazard to ships entering or leaving the port, and likely will not be so easy to raise and salvage.

It remains to be seen if Iran will let the Nimitz model be, or if it presents enough of a danger to shipping that it has to be moved. Besides, it is an open question whether Iran even is capable of raising the sunken model. Only time will tell.