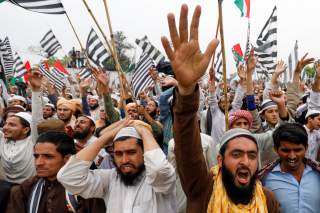 2019 marks the 40th anniversary of 1979 – which, aside from being just another anniversary, was a landmark year for American foreign and national security policy regarding the Greater Middle East.  In fact, 1979 may be said to mark the year when multiple developments fundamentally changed our approach to security policy across the Islamic world.

That year, particularly the months of November and December, saw the occurrence of several tectonic events: the takeover of the U.S. Embassy in Tehran and the start of the Iran hostage crisis, the seizure of the Grand Mosque in Saudi Arabia, and the Soviet invasion of Afghanistan.  Alarming and frustrating at the time – these events represented a sea change that we’re still grappling with today.

But another notable incident also occurred exactly 40 years ago – one that was somewhat overshadowed by other events at the time, and that has, unfortunately, been somewhat lost to history since.

That event was the assault and burning of the U.S. Embassy in Pakistan.

On November 21st, 1979, what initially started as a contained, non-violent protest outside the embassy walls quickly spiraled into a mass demonstration with agitated protestors becoming increasingly enraged and threatening to overrun the compound.  Events unfolded at a lightning pace, leaving U.S. diplomats, staff and the security element little time to react.  Swarms of protestors flocked to the area – some of them armed – and stormed the embassy perimeter, using ropes to scale the barrier fence before eventually crashing the gates.

Pakistani police had arrived on scene – but were ineffective in controlling the crowds and were swiftly pushed aside as the mob descended upon the campus.  At one point early in the conflagration, Corporal Steven Crowley from Long Island New York, serving on the Marine Security Guard detail and posted on the embassy roof, was mortally wounded.

Embassy personnel initiated procedures for information and personnel security and moved to a secure vault on the second floor.  Roughly 100 people – U.S. citizens and Pakistani employees – tensely waited out the siege, suffocating from smoke as the building burned below, while armed protestors fired rounds down ventilation shafts from the roof above.

Eventually, the Pakistani Army arrived, the crowds dispersed, and embassy staff was able to escape – but not before another American had perished, U.S. Army Chief Warrant Officer Bryan Ellis of Swansboro North Carolina.  Ellis, who tragically burned to death, was discovered in the wake of the attack and was eventually buried near his home in North Carolina.  Steven Crowley was interned at Arlington National Cemetery.  In total, six people died in a matter of hours, including both U.S. servicemen, two Pakistani employees in the embassy, and two demonstrators.

In the aftermath, the U.S. embassy was left completely destroyed, the U.S. diplomatic presence in-country was significantly reduced, and relations between the U.S. and Pakistan – Cold War allies, but already strained – further declined.  No arrests were made, and the response from the Pakistani government was limited.  A post-incident investigation conducted by the U.S. found that protestors began firing at the embassy when they thought – incorrectly – that Marine Security Guards fired on them first.

In addition to the embassy, other sites throughout Pakistan were targeted as well, including the U.S. consulate in Karachi, several libraries, and the Bank of America office in Islamabad.

Looking back, the attack on the U.S. embassy in Pakistan is important to remember for a number of reasons.

The first – is to remember the names of the brave and patriotic Americans who lost their lives in the line of duty on that day and to recognize the service of those in the diplomatic corps, the military, and the U.S. interagency, who often serve in extraordinarily dangerous regions, sometimes at disconnected and austere posts, in order to ensure the defense of America and our allies.

Second – from a comprehensive security perspective, the embassy attack provides another insightful example of how quickly events can ascend the escalation ladder.  The attack on the U.S. embassy in Islamabad essentially went from a calm and routine day to the death of Americans in very short order.  Additionally, the attack occurred in concert with numerous other incidents that all seemed to gain inspiration from the entirely erroneous claim that the U.S. was behind the seizure of the Grand Mosque – an instructive lesson in the ramifications of false information.

These concerns will only grow moving into the 21st Century, where the conflict landscape will be increasingly defined by several confusing asymmetric dynamics – from a plethora of unmanned technologies to sophisticated multi-media information operations.  With the widespread use of social media, instant video and photo capture, near-instantaneous dissemination data across the globe via social media, and imagery manipulation and creation, how information is generated, manipulated, transmitted, and interpreted represents a growing concern.  The modern smartphone – with its information capture and dissemination functions – is essentially an individual command and control mechanism.  The ability of anonymous, quickly forming “flash mobs” to assault a target – whether it’s a convenience store or an embassy on foreign soil – is readily enabled with modern handheld devices.

One is compelled to ask, “What would the incidents of 1979 look like had the mobs of protestors been equipped with internet, social media, and smartphones?"  Perhaps that retrospective inquiry might stimulate thought moving forward.

And finally, on a strategic level, the attacks on U.S. facilities in Pakistan – and the events of 1979 writ large – may be useful for reflection and review as we think about future policy in the Greater Middle East.  The U.S. wasn’t absent from the region in the latter half of the 20th Century – but after 1979, no longer could brewing instability, fundamentalist fervor, or indigenous populism, which challenged the status quo interests of the Western world, be marginalized.  Moreover, terrorism – which had largely been seen as a problem concerning issues in the Levant, or involving Marxist political groups like the Red Army Faction – was no longer viewed as a problem that affected Europe or Israel.  And while the world drastically changed after 9-11 from a counter-terrorism perspective, many of the underlying issues in Southwest Asia have not; the challenge represented by Afghanistan intimately concerns Pakistan, which in turn concerns India, and extends across the region to parts of Iran and Central Asia.

The sacking of the embassy in Islamabad certainly wasn’t the first time that U.S. diplomatic personnel were attacked abroad.  And it definitely wouldn’t be the last time that a U.S. diplomatic facility would be attacked and destroyed – in the decades since, attacks have occurred in Libya (which also occurred in late 1979), Beirut, Kuwait, Kenya, Tanzania, Benghazi and others.  But in the watershed year of 1979 – where multiple, related incidents of consequence in the Greater Middle East seemed to crash together at once, causing a major re-shaping of U.S. policy still relevant today – the attack on the U.S. embassy in Pakistan stood out.

It was another harbinger of things to come – and may represent a historic warning for the future.