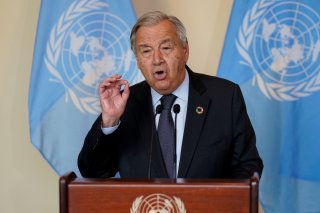 United Nations Secretary-General Antonio Guterres announced on Tuesday that the Islamic Republic of Iran and seven other countries have lost their right to vote in the UN General Assembly because of their failure to pay annual dues to the intergovernmental organization.

The secretary-general claimed that eleven of the UN’s member states were behind on their payments. Of the eleven, eight were stripped of their voting rights, including Sudan, which has been rocked by protests following a military coup in October, and Venezuela, which has faced an ongoing political crisis over the past decade. The five other countries stripped of their ability to vote were Antigua and Barbuda, the Republic of the Congo, Guinea, Papua New Guinea, and Vanuatu.

UN members that fail to pay their obligations for two consecutive years lose their voting rights unless it can be shown that the failure to pay is “due to conditions beyond the control of the member.” The latter clause allowed the remaining three countries on the list—Comoros, Sao Tome and Principe, and Somalia—to retain their votes.

The sums owed are not substantial for any of the countries. Venezuela owes the UN roughly $40 million, Iran is $18 million behind on payments, and Sudan only owes $300,000. The remaining countries owe $75,000 or less.

Iran lost its voting rights for the first time in January 2021. After lodging a protest and engaging in negotiations, the country’s voting rights were temporarily restored in June under the condition that Tehran would make a minimum payment on its dues.

The Iranian government has attributed its inability to pay to “the oppressive and illegal U.S. sanctions” that have prevented it from accessing billions of dollars in foreign accounts. Iranian officials have claimed that the country intends to resume “full and timely payment of membership dues” when its economic situation improves.

The UN’s annual operating budget is roughly $3 billion, with a separate peacekeeping budget of $6.5 billion. The dues collected from member states provide the funds for these modest budgets. Each country’s dues are calculated by considering factors such as population, gross domestic product, and size.