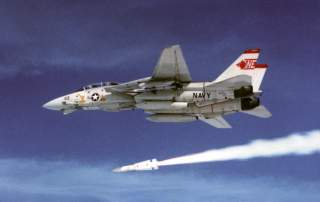 Iran has begun mass production of a long-range air-to-air missile.

And if it looks familiar, it should. The Fakour 90 is Tehran's knockoff of the U.S. AIM-54 Phoenix missile, once the prime weapon of the U.S. Navy's F-14 Tomcat fighter. Before the Shah of Iran was deposed by Islamic revolutionaries, the U.S. sold vast amounts of advanced weaponry to Iran, including F-14s, F-4 Phantoms, M60 tanks and Phoenix missiles.

Iran's new "Death to America" government analyzed and reverse-engineered the U.S. weapons (it also sent some to the Soviet Union for examination). Gripped in a devastating eight-year war with Iran, and embargoed from new Western arms, Tehran became expert in keeping its American weapons going through black-market purchases (such as the Iran-Contra affair) and homemade spare parts.

The Phoenix was an achievement in its day, a 13-foot-long missile with a 100-mile range. Coupled with the F-14's long-range AWG-9 radar, the Tomcat/Phoenix was supposed to shoot down Soviet bombers before they could get within range of the fleet. The Phoenix was first deployed in 1974 and retired in 2004, joined a few years later by the Tomcat itself as the Navy moved on to the F-18.

Iran claims it has improved Fakour improves on the Phoenix with "a superior guidance system, enhanced range and greater speed," according to defense site Military Watch. "The new guidance system is approximately 30 percent smaller, and based on the reduced weight of the more modern systems and potential for added propellants the missile's range can be estimated to have increased by approximately 15 percent relative to the original AIM-54, allowing it to hit targets at distances of 220 kilometers (137 miles). A superior fuel grain composite could potentially increase this further. The Fakour's cone also hides a sophisticated Iranian- built guidance system similar to that used on the Mersad surface to air missile, giving the platform seek-on ECM and seek-on radar capabilities."

Iranian Defense Minister Amir Hatami boasted that Iran had managed to mass-produce the missile despite U.S. sanctions against Iran's missile industry. "Today, we live in an environment, where we are surrounded by shameless enemies and mischievous people like the current rulers of the United States, and some of its allies, who do not understand anything other than the language of force,” Hatami said.

Still, there are a few questions about Iran's wonder weapon. For example, which aircraft will carry it? The Phoenix was built for the F-14 and its long-range radar, which was operated by a backseat weapons officer that guided the Phoenix close enough to the target until the missile's onboard radar took over. Iran has still kept some of its 45-year-old F-14s flying, an impressive feat analogous But effectively utilizing a missile with a hundred mile range, against 21st Century aircraft with advanced countermeasures, will require a sophisticated radar (though Iranian media reports that the missile can function independently of the launch aircraft's radar, according to Jane's).

Most interesting is that of all the weapons to resurrect, Iran chose the Phoenix missile, whose record in U.S. service was hardly unblemished. The Phoenix saw combat thrice, when the U.S. Navy fired three AIM-54s at Iraqi aircraft in 1999. All three missed. While the Phoenix had long range, it was a heavy, expensive missile that lacked maneuverability against agile targets like fighters. The current U.S. AMRAAM radar-guided missile has half the range of the Phoenix, but is far more maneuverable.

Iran did claim numerous Phoenix kills during the 1980-88 Iran-Iraq War. Even if true, that tally was hardly scored against the most proficient of air forces. If the U.S. attacks Iran with slow, unwieldy bombers like the B-52, then perhaps the Fakour will have its day. But against F-35s and F-18s? The Fakour may turn out be a faker.

Michael Peck is a contributing writer for the National Interest. He can be found on Twitter and