Iran Has A New Missile, Should Israel Be Worried? 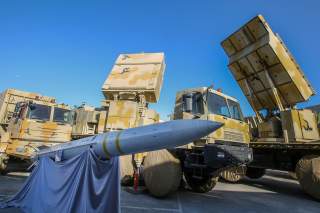 Key point: This wouldn't be the first time Iran has exaggerated its weapons developments.

Iran has unveiled a kit that appears to convert unguided surface-to-surface rockets into guided weapons.

The Labeik kit “looked similar to the guidance units used with the Fateh-110 family of solid-propellent missiles, although its four triangular control surfaces were inverted,” according to Jane’s Defense Weekly, which based its analysis on Iranian television footage of a military parade earlier this month. “As with the Fateh-110 family, these would be attached between the rocket motor and warhead to steer the projectile. They appeared to be compatible with the 610-millimeter diameter of the Zelzal heavy artillery rocket.”

This development worries Israeli military experts, who note that Hezbollah – Iran’s proxy army in Lebanon – has an estimated arsenal of 150,000 rockets aimed at Israel. Currently, most are “dumb” weapons. “There is nothing new in the conversion itself, they have been doing it for years, and they already showed conversion kits for the Fateh-110 family of missiles,” missile defense expert Uzi Rubin told the Times of Israel.

“What’s new here are the aerodynamics of the winglets — very unique, unseen in Iran to date and unseen in any other country. Going to indigenous design rather than copying others indicates self-confidence. The purpose of the new and unique aerodynamics is probably to increase the maneuverability of the converted rockets.”

Unguided rockets have become a fixture of warfare since World War II, when Russia’s legendary Katyusha pulverized Nazi troops. Though capable of generating fearsome and impressive destruction with a fiery multi-rocket salvo from a single launcher, artillery rockets have been inaccurate weapons that rely on saturating a target with massed fires. Precision fire would be the job of the howitzers and mortars.

However, if Iran can convert an unguided rocket into a guided weapon, this would dramatically change the rocket’s effectiveness. Iran has a variety of rocket systems based heavily on old Soviet designs, such as the Falaq-1, which resembles the Soviet BM-24 240-millimeter multiple rocket launch system. Iran also has several types of guided ballistic missiles such as the Fateh-110, which has a range of more than 100 miles and inertial or GPS guidance.

That the Israelis are worried are no surprise. Already concerned about Hezbollah firing massive volleys across the Lebanese border into Israel, now the Israel Defense Forces must consider the possibility of massive salvoes of guided weapons aimed at strategic targets such as oil tanks, chemical refineries and military airfields. If these rockets are maneuverable, then they may be able to avoid interception by Israeli missile defenses such as Iron Dome.

But Saudi Arabia may be worried, too. Last month’s massive drone and cruise missile attack on Saudi oil facilities was claimed by Houthi rebels in Yemen, which are battling Saudi-backed forces. However, the U.S. and Saudi Arabia believe the weapons were fired from Iran, or were fired from Yemen or Iraq with Iranian help. Though Riyadh has spent billions on acquiring American-made Patriot air defense missiles and radar, Saudi defenses failed to detect or intercept the incoming drones and missiles. How will those defenses fare against a massive barrage of guided rockets?

However, Iran has often made suspect claims about developing new weapons, such as a stealth fighter. Until they have been used in combat, we can’t sure be sure of how effective the Labeik kit is at turning dumb rockets into smart ones.