The Iran-Iraq War: It Still Haunts the Middle East To This Day 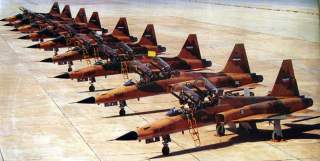 Here are four reasons why that conflict still matters...