Is the Iran-Israel Conflict Coming to Bahrain? 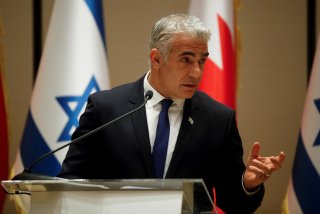 Bahrain, a small island country in the Persian Gulf, is a land in which a Sunni kingdom rules over a majority Shia population. The country was separated from Iran by a controversial referendum in 1970. Bahrain now defies its motherland with the normalization of its relationship with Israel, Iran’s nemesis.

Bahrain also hosts the U.S. Navy’s Fifth Fleet at a logistical and security base against Iran’s ambitions in the Persian Gulf. Due to Iran and Bahrain’s shared history and the fact that the latter has a majority Shia population, Bahrain’s Sunni rulers have remained vigilant in preventing the Islamic Republic from extending its influence and exporting its revolutionary ideology to the island country.

The top Iranian diplomat warned that Israel’s presence in the Persian Gulf region would result in nothing but insecurity for Bahrain and the entire region.

Judging by the fact that anti-Israel protests broke out after Lapid’s visit—leading police to fire tear gas at one rally as scattered, small-scale protests took place elsewhere—the opening of the Israeli embassy could galvanize Bahraini Shias against the Sunni government, paving the Islamic Republic’s path to exerting more influence in Bahrain. Protesters marched waving Palestinian and Bahraini flags, chanting “Death to Israel” and “No to the Israeli embassy in Islamic Bahrain.”

While Iranian officials have frequently emphasized that Iran will not tolerate Israel’s presence Israel near its borders, some observers believe that Bahrain has crossed the Islamic world’s red lines by normalizing its relationship with Israel under the pretext of threats from Iran.

After the Islamic revolution in 1979, Bahrain has kept its distance from Iran on economic and political issues. As a result, Iran is far from one of Bahrain’s top trading partners, and Bahraini exports to Iran have been steadily decreasing from $49.5 million in 1997 to $1.58 million in 2018.

Due to concerns regarding Iran’s nuclear and missile programs and foreign policy, Bahrain has also found refuge under the U.S. security umbrella that also includes Saudi Arabia and Israel, which have united against what they perceive to be threats from Iran.

“We must respond to Iran’s missile program, its support for proxies in the region, and its interference in the domestic affairs of states across the region,” said Bahraini foreign minister Abdullatif bin Rashid Al Zayani in January 2021.

Also, Bahrain’s undersecretary for international relations, Abdullah bin Ahmad al-Khalifa, said during an official visit to Israel in August 2021 that the Joint Comprehensive Plan of Action (JCPOA), also known as the Iran nuclear deal, had brought about “more crises and violence.”

He declared that his country had hoped the JCPOA would change Tehran’s behavior and increase regional security but that such hopes had been frustrated.

In August 2020, Bahrain and the United Arab Emirates officially announced their intention to engage in political and economic relations with Israel and normalized their relationship in the U.S-brokered Abraham Accords. The agreement has changed the balance of power in the Middle East in favor of Israel, who is now closer than ever to Iran’s border.

In the aftermath, Iran has harshly criticized the Bahrain-Israel rapprochement, and the Islamic Revolutionary Guard Corps (IRGC) launched a personal attack against the Bahraini monarch: “The executioner ruler of Bahrain should await the harsh revenge of the holy warriors of the liberation of Quds [Jerusalem] and the honorable Muslim nation of this country [Bahrain].”

Bahraini and U.S. officials have condemned Iran for supporting and organizing opposition groups inside Bahrain, including Saraya al-Mukhtar, Saraya al-Ashtar, and Al-Wefaq, to overthrow Bahrain’s Sunni leadership and establish a Shia government. The United States has even designated some Iran-backed Bahraini groups as terrorist organizations and accused them of receiving financial and logistical support from the IRGC.

While Iran denies any involvement in Bahrain, Bahraini officials have rebuked the IRGC for galvanizing Bahrain’s Shias to depose the government during the uprising of February-March 2011. Bahrain’s king blamed a foreign plot for the nation’s unrest, using veiled language to accuse Iran of fomenting a Shia uprising. In response, Iranian supreme leader Ayatollah Ali Khamenei asserted that claims that the protesters are linked to Iran were a lie. “Wherever Iran interferes, it will directly state it,” Khamenei added before noting that if Iran had intervened militarily in Bahrain, the situation would have been different.

Iranian officials have made no secret of their desire for a new government in Bahrain that represents the opinions of the majority Shia population. “The people of Bahrain say that every individual from among the nation should be given a vote to elect the government. A vote for each person. Not only do Bahraini officials not give them the right to vote, but they also pressure, insult and humiliate the majority of the people. These people form the majority of the population. These people who are asserting their rights form 70, 80 percent of the population. The oppressive minority has the power in his hands, and he is doing whatever he wants to them,” Khamenei said.

Even after the Islamic revolution, some Iranian officials have believed that Bahrain belongs to Iran. In 2012, Iranian parliamentarian Hussain Ali Shahriari claimed that “if anything new happened in connection with Bahrain, it would be Iran’s right to decide about Bahrain.”

Additionally, Iran’s Keyhan conservative newspaper, whose director was appointed by Khamenei, wrote in 2007 that “Bahrain was a part of Iran’s territory until forty years ago. Today, the major demand of Bahrainis is returning the separated province to Iran, its motherland, and it is an inalienable right of Iran and people of Bahrain.”

Despite these remarks, Iran has consistently recognized Bahrain as an independent country, but Manama’s recent normalization with Israel, and the potential for future military cooperation, may exacerbate extremism within the country.

Either way, Bahraini officials are likely to remain cautious about provoking Iran, which has a strong political and cultural influence in Bahrain. Bahraini officials will not soon forget that, during the 2011 uprising, some Bahraini Shia sent a letter urging the Iranian supreme leader to help their cause. That leaves Bahrain in a precarious position where Manama must balance its new relationship with Israel against the threat of domestic turmoil. Another uprising could well spell the end of the royal system as we know it.