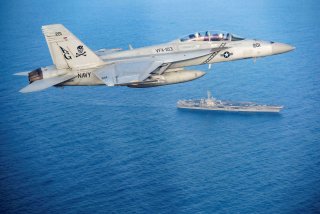 Here's What You Need To Know: Tehran realizes its naval forces don’t have the survivability or firepower to slug it out with adversaries in a head-on engagement. Instead it would lean on the shallow, confining geography of the Persian Gulf and especially the chokepoint of the Strait—only twenty-nine miles from shore-to-shore at its narrowest point—to launch swarming motorboat attacks, mini-submarine ambushes and long-range strikes with antiship missiles.

Sébastien Roblin holds a Master’s Degree in Conflict Resolution from Georgetown University and served as a university instructor for the Peace Corps in China. He has also worked in education, editing, and refugee resettlement in France and the United States. He currently writes on security and military history for War Is Boring. This first appeared in November 2017 and is being republished due to reader's interest.