Iran Responsible for Drone Attack on U.S. Base in Syria 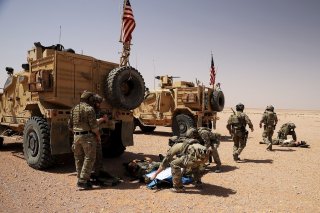 Last week’s drone attack on a military base in southern Syria that houses U.S. forces was likely carried out at the behest of Iran. While the drones used in the attack were not launched from Iran, officials believe that Iran provided the resource and encouraged the attack at the outpost at al-Tanf Syria. At least five drones laden with explosive charges were directed at the base—striking both the Syrian and U.S. sides of the military facility.

The al-Tanf garrison (ATG) is located within territory controlled by the Syrian opposition forces in Homs Governorate located twenty-four kilometers west of the al-Tanf border crossing in the Syrian Desert. The U.S. military has maintained a presence at the outpost since early 2016 during the American-led intervention in the Syrian Civil War to train anti-Islamic State (ISIS) fighters of the New Syrian Army rebel group, which opposed the official government located in Damascus. That force dissolved, while its remnants reemerged as the Revolutionary Command Army, with ATG as its headquarters.

The presence of the American garrison within Syria remains controversial as both the Syrian government in Damascus and the Russian government consider it to be illegal. The Syrian regime has called for the withdrawal of all foreign forces from Syria.

U.S. and international troops are based in al-Tanf and continue to train Syrian forces as part of the global coalition to defeat ISIS.

Last week’s drone strike resulted in no deaths or injuries, and this week Pentagon press secretary John Kirby declined to assign responsibly during his Monday briefing with reporters. However, Kirby said that the U.S. forces have seen similar types of attacks carried out by Shia militia groups that receive backing from Tehran, The Hill reported.

“I’m not going to talk specifics on this particular attack,” Kirby told reporters. “It was complex, it was deliberate, and thankfully… we don’t have any indication right now that any U.S. service members were hurt.”

The Associated Press also reported that Pro-Iran media outlets have said that the attack on Tanf was carried out by “Syria’s allies”—a possible reference to Iran-backed groups. The drone strike was reportedly carried out in retaliation for an attack days earlier near the historic Syrian town of Palmyra. Israel has been blamed for the attack, while U.S. officials have also maintained that America was not involved with it.

Tensions between Washington and Tehran have been on the rise, even as the Biden administration announced that international diplomatic efforts to get Iran back into negotiations to return to a 2015 nuclear deal were at a “critical place.”

This is the first major Iranian attack on U.S. forces since January 2020, when Tehran launched a barrage of ballistic missiles on the al-Asad airbase in Iraq. That attack was conducted in response to the U.S. drone strike earlier that month near the Baghdad airport, which resulted in the killing of Iranian Gen. Qassem Soleimani and Iraqi militia leader Abu Mahdi al-Muhandis.

However, prior to the January 2020 attack, U.S. and coalition troops were warned of the incoming missiles and were able to take cover. Yet more than a hundred U.S. service members still suffered from traumatic brain injuries as a result of the blasts. Two months after the al-Asad assault, U.S. fighter jets conducted a retaliatory strike against five sites, targeting Iranian-backed Shiite militia members believed responsible for the January rocket attack.

It is unclear if the U.S. forces will now strike back at Iran after last week’s drone attack.