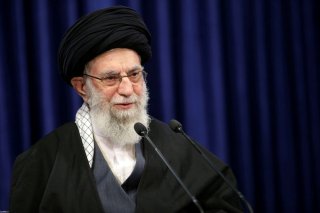 The video depicts a ground drone infiltrating the residence with the assistance of an Iranian hacker who deactivates a series of security cameras. The mansion is then surveyed by an aerial vehicle described as an “AC-130,” although the Iranian air force does not operate the Lockheed/Boeing C-130 Hercules or its AC-130 gunship variant. The Jerusalem Post noted that the heads-up display depicted in the video is nearly identical to a display seen in the video game Call of Duty 4: Modern Warfare, suggesting that it could have been lifted from that game.

The drone then moves to a golf course where the video’s animated version of Trump—complete with a red “MAGA” hat—is playing with a group of associates. One of the people accompanying Trump is then sent a text message informing him that “Soleimani’s murderer and the one who gave the order will pay the price.”

The ground drone helps guide an aircraft that resembles a Shahed Saegheh drone toward Trump’s golfing party. Finally, a red button is pressed, and a picture of Soleimani comes into focus.

Khamenei and a number of Iranian-affiliated media outlets have made repeated promises to take revenge against Trump for his role in Soleimani’s killing. On January 22, 2021, an image, also titled “Revenge is Definite,” depicted Trump golfing as the shadow of an Iranian aircraft passed overhead.

A second video published on the website of Iranian President Ebrahim Raisi showed alternating cuts of speeches made by Raisi and Trump. The video, which was titled “Hard Revenge is Certain,” also showed photos of Soleimani and ended with a title card that described the general as a “#Hero.”

At the time of the killing, Iranian officials and state media described the assassination as an “act of war” and promised to avenge Soleimani’s death. There has been an escalation in attacks against U.S. military targets in Iraq and Syria in the two years since his death. During his lifetime, Soleimani led the Iranian Revolutionary Guard Corps’ Quds Force, a military unit tasked with aiding Iranian-backed militias elsewhere in the Middle East.