Iraq in Crisis: Why the Sinjar Agreement Failed 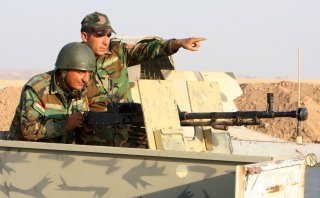 On May 2, clashes broke out between the Iraqi Army and the Sinjar Resistance Units (YBS), a Yezidi armed group established to defend Iraq’s Sinjar region from ISIS in 2014. Initial reports have alleged casualties on both sides and the displacement of thousands of civilians. The Iraqi Army has reportedly given the YBS an ultimatum to withdraw—though the group’s fighters are Iraqi Yezidis from Sinjar themselves.

The return of conflict to Sinjar, almost eight years after the Yezidi Genocide began, is a result of failed policies at the local, regional, and international levels. Early responses have zeroed in on symptoms, not root causes, suggesting that instability will continue. Such a future would be devastating for Yezidi civilians first and foremost, and for peace and security in Iraq and the region overall.

Currently, the primary diplomatic line of effort to stabilize the region is the Sinjar Agreement between the Iraqi government and the Kurdistan Regional Government (KRG), which was put forward in October 2020.

The agreement was endorsed by a variety of international actors, including the United States and Turkey. Yet it excluded the most important perspectives: those of the Yezidi community itself. As written, it would dismantle the YBS entirely, a fate the group has promised to resist.

Baked into the agreement was the assumption that Baghdad and Erbil ought to have a greater say in Sinjar’s fate than the region’s residents. This set it up for failure from the outset and reinforced the dynamics that led to Sinjar’s current crisis.

Yezidis have faced structural discrimination and periodic violence throughout the entire history of modern Iraq. They have never been fully or fairly represented by the Iraqi central government or the KRG. The fact that neither proved able or willing to defend the region from ISIS’ genocidal onslaught was a deadly manifestation of this history.

The involvement of the Kurdistan Workers’ Party (PKK) and the Syrian Kurdish People’s Protection Units (YPG) in Sinjar in August 2014, cited erroneously by some as the root of today’s challenges, stemmed from this reality as well. These forces entered the region to fight ISIS, protect civilians, and provide training and assistance to Yezidis who wanted to fight back themselves.

Had the ISIS attack been prevented by local authorities or met with an immediate response by any regional or international power, there would have been no need for lightly armed non-state actors to step in. The fact that such groups were able to mount a successful humanitarian evacuation shows how simple an effective response would have been for governments if they simply had the political will to act at the time.

Punishing Yezidis for accepting military assistance when their survival was at stake and attempting to disarm genocide survivors by force, as the Sinjar Agreement seeks to do, will not lead to sustainable peace in Sinjar. This week’s clashes show that such an approach has only made the situation more volatile, with civilians paying the highest price.

What Sinjar needs today is a transformative political solution with deep and comprehensive roots—led by Yezidis and supported by significant international investment.

Attempts to determine the status of the region must not pick and choose which local perspectives to include, nor which external forces to exclude. Yezidis in Sinjar today have joined a variety of armed groups and lent their support to a variety of political structures. Many more live as internally displaced persons (IDP) in camps in Iraqi Kurdistan, unable to return home after nearly eight years. A process led by people from Sinjar and facilitated by impartial international mediation could include the diverse opinions and perspectives held by Yezidis and block external power plays.

Such a solution should give Sinjar a significant degree of local control over its security. Sinjar’s residents must never again be in a position where their security is dependent on outside actors that failed to respond to ISIS in 2014. Rather than forcing any existing Yezidi faction to disarm or outsourcing security to actors with little local trust, a potential settlement could integrate all local armed groups into a single structure.

Any settlement should also grant Yezidis meaningful political power. The prominence of competing external interests in Sinjar stems in part from the political marginalization of Yezidis in Iraq and the historic co-optation of the region’s politics by Iraqi central and Kurdish regional authorities. Strengthening political institutions and political participation in Sinjar could push back on this trend and create a foundation for peace and coexistence.

Existing Iraqi law has mechanisms under which communities can gain autonomy in local political and military matters while remaining integrated with the central government. These possibilities should be explored based on local perspectives and needs.

To make such a process successful, Sinjar must be free from armed conflict. Impartial authorities must work to end the current tensions between the Iraqi Army and the YBS as soon as possible and take steps to prevent future violence instigated by any local or foreign actor.

This must include the closure of Sinjar’s airspace to all military aircraft, excluding counter-ISIS missions. Turkish airstrikes and drone strikes in the region have destroyed civilian infrastructure and prevented the return of IDP. Turkey has also assassinated respected Iraqi Yezidi community leaders, leaving the region without figures who could have played roles in diplomacy and dialogue.

The international community must also invest in reconstruction. No sustainable political or security arrangement can function if communities lack the basic resources that they need to live. Sinjar was poor and underdeveloped before the war, another impact of the structural discrimination and marginalization Yezidis faced. Increased reconstruction efforts could facilitate IDP returns and incentivize different political and military factions to work together to gain international support and legitimacy.

A secure and empowered Sinjar governed and protected by its own people and at peace with other local authorities is the only path forward to ensure justice for Yezidi genocide survivors, prevent future atrocities, and ensure long-term stability in the region. Abandoning the Sinjar Agreement and pursuing comprehensive, creative, and locally-driven solutions could make it a reality.