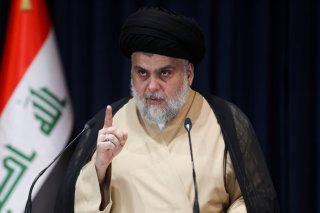 After the preliminary results from Iraq’s electoral commission became public on October 12, Iranian-linked parties immediately denounced the outcome as a “scam.” The political bloc affiliated with Iraq’s Popular Mobilization Forces (PMF), known as the Fatah Alliance, witnessed its parliament seats drop from forty-eight to a dozen at best. Results predict that the biggest winner will be Muqtada al-Sadr, the leader of the Sadrist Movement, whose initial thirty-four seats increased to seventy-three. With voter turnout at a record low of 41 percent, the Iraqi people demonstrated their overwhelming dissatisfaction with the country’s governance and Iran’s political influence in the country. Although pro-Iran parties appear to be on the losing side of this election, they will likely move to exert pressure on the other Shiite blocs to gain enough support to form a coalition. A Sadrist government may be the cudgel needed to finally thwart Tehran’s rogue influence in Iraq.

Previously the second-largest bloc in parliament, the Fatah Alliance once held immense popularity and influence in the Iraqi government. The Iranian-linked Shiite militias collectively known as the PMF were initially created in 2014 to aid in Iraq’s fight against the Islamic State (ISIS). In the beginning, these militias played a critical role in defeating ISIS militants. However, Iran quickly seized upon the opportunity to transform the PMF into a tool to project Iranian influence over Iraq’s economic, political, and societal spheres.

Yet support for the PMF and pro-Iranian movements dissipated as Iran contributed to the corruption, economic collapse, and turmoil that has plagued Iraq. Iraqi grievances culminated in the 2019 "Fall Revolution" protests when frustrated citizens demonstrated against Iran’s interference throughout the country. In fact, the low voter turnout rate in October’s election is in part tied to the Iraqi people’s mistrust in their government, which they perceive as tainted by Iranian influence.

The 2019 protests culminated in the election of interim Prime Minister Mustafa al-Kadhimi, a critic of the PMF and friend of the United States. Kadhimi made unprecedented steps to thwart Iran’s influence in Iraq, including the arrest of prominent militia members and his pledge to punish those responsible for carrying out attacks against U.S. assets. Although Iran’s popularity and overreach have been limited under Kadhimi, the PMF’s power still threatens Iraq’s sovereignty and its ability to work with strategic allies. The Fatah Alliance, which is made up of these militias, will therefore do whatever it takes to prevent the anti-Iran Sadrist movement from taking hold of Iraq’s government.

After the election results were published, the Fatah Alliance began a campaign aimed at smearing the electoral process and the Sadrist movement as a whole. Hadi al-Amiri, the pro-Iranian commander of the Badr Organization and Fatah, claimed the preliminary outcome was “fabricated,” adding that “[Fatah] will not accept these fabricated results, whatever the cost.” In response to the PMF’s uproar and subtle call to arms, Sadr stated that weapons “should be controlled by the state only, and the use of arms must be banned outside this scope, even if it’s used by those who claim they are the resistance.”

In this statement, Sadr is referring to a major point of contention regarding the PMF and its role within the Iraqi Security Forces. Ever since the PMF was formally institutionalized into Iraq’s security apparatus in 2018, these Iranian-linked militias have used Iraqi weapons and resources to conduct operations that aim to further Iranian interests under the guise of “resistance.” Their rogue activities have consistently jeopardized Iraq’s sovereignty and threatened civilian lives. It is not out of the realm of possibility that Sadr could work to overturn the PMF’s inclusion within the Iraqi Security Forces, and his remarks threaten just that.

Without its proxies, Tehran’s ability to project power abroad is nearly nonexistent. Since Iraqi support for the PMF has already dwindled significantly in recent years, the preliminary election results do not bode well for Iran’s future in the country. In the upcoming months, Fatah will likely work tirelessly to undermine the election results and secure its position in coalition negotiations. Ultimately, this election will significantly impact Iraq’s relationship with its neighbors and the United States for years to come.

Maya Carlin is an analyst at the Center for Security Policy in Washington D.C. and a former Anna Sobol Levy Fellow at IDC Herzliya.