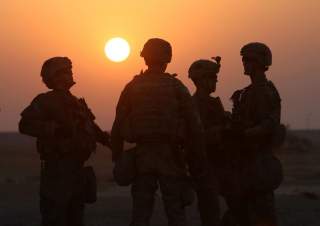 Contrary to popular belief, the first shots by the United States military post–9/11 were not fired in Afghanistan.

On September 11, 2001, nine hours before American Airlines Flight 11 struck the North Tower of the World Trade Center, a United States RQ-1B Predator Unmanned Aerial Vehicle (UAV) was lost over the skies of Iraq. Though the incident was soon overshadowed by the tragedy unfolding in New York and Washington, it eventually drew retaliatory action against the Iraqi air-defense network. Few knew it at the time, but the promptly-forgotten incident foreshadowed what was to come just two years after that infamous September day.

One of the most compelling questions raised by 9/11 is whether the United States would have invaded Iraq had the former event not occurred. After all, 9/11 was used as justification for regime change in Baghdad. Although Iraq had nothing to do with 9/11, the attacks issued a blank check of sorts for the United States to settle scores with hostiles all around the globe and few, aside from Osama bin Laden and radical Islamic terrorism, were more glaring than Saddam Hussein.

Controversial as the 2003 invasion of Iraq continues to be, along with the justifications for it, the answer to whether 9/11 was indeed the tipping point in America’s confrontation with Iraq is less obvious than appreciated. While history has made it easy to believe Operation Iraqi Freedom would have never happened without 9/11. A longer view of the U.S.-Iraq conflict reveals that two adversaries were trapped in a vicious circle that would have eventually led to a fatal collision.

The U.S.-Iraq conflict is not the tale of two wars, but of a single decades-long war. By the time the first shots of Iraqi Freedom were fired, the United States and its coalition allies had been pursuing a strategy of containment on Iraq for twelve years. Containment was implemented primarily through two no-fly zones, one in the north and one in the south, along with draconian economic sanctions. Though the “war between the wars” took place in the vast gray zone of no war, but no peace, either, at times, U.S. and allied pilots often found themselves in a full-blown shooting war. As Michael Knights reported in his extensive treatise on the U.S.-Iraq conflict:

The United States and Britain had flown 265,000 sorties in the southern no-fly zone and 122,500 in northern Iraq—an average of 34,000 sorties each year, the equivalent of refighting Desert Storm every three years. During the twelve years of no-fly-zone operations, Iraq had never backed off, even under the sustained campaigns of 1999 and 2002. It used the no-fly zones to underline the regime’s unflinching opposition to foreign containment.

Incidents such as the loss of the Predator UAV on 9/11 were just another day in the life of enforcing the no-fly zones. In the roughly three-year period leading up to 9/11, Saddam Hussein intensified targeting of U.S. and coalition aircraft, firing surface-to-air-missiles or anti-aircraft artillery on a near-weekly basis. The Iraqi dictator went as far as offering sizeable bounties as incentive to shoot down aircraft and capture U.S. and coalition pilots. Though the enforcers did not respond to all provocations, they occurred with alarming regularity and almost every month in the three-year-period leading up to 9/11 saw at least a few retaliatory actions initiated against Iraqi forces.

Well into President George W. Bush’s first year in office, the Iraqi skies were deemed as unsafe to fly in as they were during Desert Storm in 1991. The United States and the coalition had yet to lose an aircraft in the no-fly zones, but by 2001, it seemed only a matter of time before their luck ran out. Less than a month after Bush’s inauguration, the United States and its allies launched one of the largest air strikes against Iraq prior to the 2003 invasion. CENTCOM also requested less restrictive and more extensive and flexible response options, motions supported by the new Secretary of Defense Donald Rumsfeld. And although no-fly-zone patrolling would be reduced for a time to minimize the risk to aircrews, this only emboldened Saddam. When no-fly-zone enforcement returned to its usual levels shortly after 9/11, the conflict picked back up where it left off.

The containment of Iraq had also worn out its welcome with the military and the national-security policymakers by 2001. The former found the venture aimless, a no-win situation in which lives and material were placed at great risk for little to no strategic gain. The latter judged containment to be failing, as evidenced by Saddam’s continued aggression and defiance of the no-fly zones and sanctions. As far back as the Clinton administration, regime change was cemented as the official policy of the U.S. towards Iraq and the Bush administration was stacked with neoconservatives and fiercely hawkish policymakers, such as Vice President Dick Cheney, Secretary Rumsfeld, Paul Wolfowitz, Elliot Abrams, among others.

It is now nearly impossible to disassociate 9/11 from Iraq, but it seemed then as it does in hindsight the United States and Iraq were destined to clash once again. The battle for Iraqi airspace created more than enough opportunities for another war and the Bush administration had a roster of policymakers deadly serious about fulfilling goals set forth in the years leading up to 9/11. What is less clear is if the United States would have invaded Iraq in the absence of the devastating acts of terror. The terror attack on 9/11 formulated a rallying cry that helped shift public opinion in favor of regime change in Iraq. In the months leading up to the attacks, the no-fly zones were becoming increasingly unpopular both in Congress and among the few in the public aware of their existence.

Without 9/11, Washington would have had to rely on options short of invasion, such as supporting internal opposition groups. With the no-fly zone and containment regime still in place, the United States could support an insurrection using air power and a limited ground presence, thereby softening any political and public blowback—although the success of such a strategy is questionable. It is possible Saddam Hussein would have continued to weather the storm as he had for over a decade, or the situation would have escalated into a bigger, broader war that would have eventually drawn in a more considerable U.S. and allied military deployment.

Finally, there is the possibility of simply kicking the can down the road, as administrations often do. This, however, only ensures some future administration would have had to deal with Baghdad. Unless Saddam Hussein’s regime collapsed, was removed, or miraculously achieved a grand bargain with its enemies, the U.S.-Iraq conflict was guaranteed to continue in perpetuity. Ironically, the United States continues to fight in Iraq to this day, even with Saddam having been removed from power.

Unfortunate as it was that Iraq was invaded under flawed premises, it would be disingenuous to suggest it was the result of one presidential administration’s exploitation of a national tragedy. Rather, the Iraq War was a logical product of a twelve-year crisis with no end in sight. If it didn’t happen in March 2003, then some president would have had to make the tough choice to attempt to end the conflict for good or pass it onto the next president. The Bush administration chose the former.

Right or wrong, it was a choice that may have been inevitable.