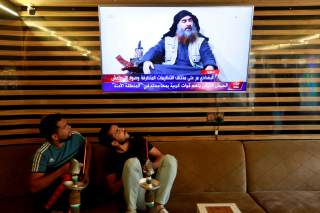 Al-Baghdadi died during a two-hour-long raid, and a DNA test confirmed the dead body is that of the ISIS leader, President Donald Trump said Sunday morning. White House national security adviser Robert O’Brien said on NBC’s “Meet the Press” Sunday that the U.S. would likely dispose of al-Badghdadi’s body in accordance with Islamic law.

Details regarding where and when the body was buried have not been released.

“His body will be disposed of properly, to the extent that we have, as the president said he died blowing up — pulling his…the toggle on his vest,” O’Brien said Sunday, adding that the U.S. will follow the same protocol as when Osama Bin Laden was killed.

Al Qaeda leader Osama Bin Laden was killed in a 2011 raid in Pakistan by U.S. Navy SEALs and was also buried properly at sea, although the decision sparked backlash from Muslim scholars who alleged that a sea burial is not standard. The White House insisted that the burial followed proper protocol under the circumstances surrounding Bin Laden’s death, CBS News previously reported.