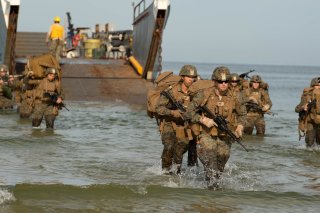 The U.S. Marine Corps is building a new Advanced Reconnaissance Vehicle (ARV) to support multi-domain amphibious warfare in the Pacific. Amphibious operations are expected to involve “island hopping” and rapid transit from ship to shore and between islands, coastal areas, and deep water.

The ARV, which is slated to arrive by the end of this year for further U.S. Marine Corps evaluations will be a lighter, faster, and more technologically advanced reconnaissance and surveillance scout vehicle that can support amphibious attacks by identifying enemy positions, targeting high-value areas, and penetrating fortifications.

Both Textron and General Dynamics Land Systems (GLDS) are offering prototypes to the U.S. Marine Corps to be chosen for production next year if the service moves forward with its plans for the vehicle. The U.S. Marine Corps is looking for a model that can “sense” and “network” across the force in support of a multi-domain fight.

“We built a demonstrator based on a set of attributes for the  ARV. When we delivered the first demonstrator it went through fairly rigorous testing. Really the core of the capability was its ability to use its on-board sensors as well as connect to other off-board sensors such as a UAS system, ground vehicle, or sensor elsewhere on the battlefield,” said Phil Skuta, the director of strategy and business development U.S. Marine Corps and Navy, General Dynamics Land Systems.

Multifunctional sensing, enabled by manned and unmanned sensors and “nodes” throughout a dispersed area supported by long-range sensors and weapons, is a focus for the ARV among system developers. The GDLS offering, for instance, includes a raisable sensor “mast” able to elevate electro-optical/infrared (EO/IR) cameras. Engineers with GDLS have sought to build a vehicle capable of connecting and sharing information across an entire force of on-board, off-board, manned, and unmanned sensor nodes. This engineering focus is intended to align fully with the U.S. Marine Corps’ plans outlined in the services’ Force Design 2030.

“We need to transition from our current UAS platforms to capabilities that can operate from ship, from shore, and be able to employ both collection and lethal payloads. These future capabilities must be expeditionary and fully compatible with Navy platforms and command and control networks,” Marine Corps Commandant Gen. David Berger wrote in the Force Design 2030 document.

Multi-domain sensing extends beyond infrared and EO/IR systems and, GDLS developers say, includes acoustic sensors able to bounce signs off of an existing library and use cyber and electronic warfare techniques.

“There are also a range of electronic capabilities connecting into a broader network. Information that will come across satellites can be brought on to the vehicle ,then you have more tactical level a range of capabilities,  intended to be able to sense and make a determination as to what the enemy may be doing,” Skuta said.