Israel and the China Connection 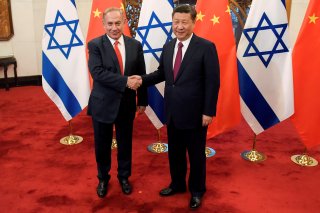 No doubt, the coronavirus pandemic has deepened the schisms in the U.S.-China relationship, which has been slipping down the path of a new Cold War. Believing that China’s global soft power expansion by investing in infrastructure and companies abroad presents a serious national security threat, the Trump administration has pressured its allies and partners to censor and/or regulate Chinese investment in their countries. Unless steeped in a comprehensive understanding of China’s aspirational global role and systematic actions, coupled with an alternative strategy to Chinese investment, the Trump administration’s policy is all sticks and no carrots guaranteeing at best-mixed results.

Among Washington’s allies that have faced increasing pressure to censor Chinese investment in their country is Israel. The recent contractual win of Israeli company IDE Technologies to build the Sorek2 water desalination plant over the Hong Kong-based Hutchison Water controlled by Chinese billionaire Li Ka-shing, as originally thought, is undoubtedly a reflection of Jerusalem’s deference to Washington’s concerns and pressure. In fact, Washington has for some time raised its concerns with Israel over Chinese investment in and/or control, among others, of Haifa Port and over dual-use technologies. American officials are worried that China’s Shanghai International Port Group running the port could jeopardize the security of America’s 6th Fleet that docks at Israeli ports. They also worry about Chinese firms acquiring Artificial Intelligence capabilities through civilian investments that could enhance a new generation of Chinese weapons.

The Israel-China relationship has steadily improved since the two countries established diplomatic relations in 1992. Significantly, the level of economic cooperation shot up when Chinese leader Xi Jinping assumed the presidency in 2013. Bilateral trade went from a meager $50 million in 1992 to $5 billion in 2010, then soared to $15.3 billion in 2018. Israel provided China a stable, flourishing, and sophisticated nation with a highly advanced technological sector. Initially, China sought Israel’s expertise in solar energy, robotics, construction, and agricultural and water management and desalination technologies. The two countries signed two financial cooperation agreements in 1995 and 2004 to promote bilateral trade. By 2010, Israel had approximately 1,000 firms operating in China.

Chinese investment in Israel’s agriculture was greatly boosted by Chemchina’s acquisition of Adama for $3.8 billion (previously known as Machteshim-Agan). This huge investment has been followed by seminars on the local government levels. For example, the Yunnan-Israel Modern Agriculture Exchange Seminar in Kunming, Yunnan province on July 12, 2019, focused on “water-saving irrigation, greenhouse technology, fertilizer use, plant protection and breed cultivation, with modern agriculture discussed in relation to internationally-advanced technologies.”

In the academic sector, a number of Israeli universities have established joint institutions. Tel Aviv University and Tsinghua University spearheaded this effort by founding the XIN R&D Center. According to its website, the XIN Center promotes international science, technology and education collaborations. It also serves as the Secretariat of the China-Israel 7+7 Research University Alliance. No less significant, partnering with Shantou University, the Technion-Israel Institute of Technology, a global leader in science and technology education, founded the Guangdong Technion Israel Institute of Technology (GTIIT) in Guangdong province. GTIIT will offer research-oriented undergraduate and graduate education.

The two countries also established industrial zones connecting local governments with companies across industries spanning the gamut from medical to agriculture, to food, to finance, to automobile parts. The Changzhou Park in Jiangsu Province has become indispensable for China’s Ministry of Science and Technology. Similarly, the two countries’ interest in collaborating on innovation and technology led to the establishment of the Comprehensive Innovation Partnership. During the China-Israel Innovation Collaboration Summit in Be’er Sheva in 2017, two memorandum of understanding (MOU) were signed between the Gav-Yam Negev Advanced Technologies Park and Shanghai Zhangjiang High-Tech Park, and Sino-Israel Technology Innovations (SITI) and Basecamp. Gav-Yam Negev Tech Park is based on a Public-Private Partnership between BGU (Ben-Gurion University), city of Beer-Sheva, Gav-Yam and Innovation BaseCamp. Innovation BaseCamp is a leader in Israel’s Silicon Wadi valley striving, in partnership with multinational companies, to “initiate, establish, manage and connect all attributes together to create flourishing innovation ecosystems.” The MOU between SITI and Basecamp underscored the mutual effort to incubate high-tech projects in Israel and to commercialize them in China.

These efforts have been supported by the Prime Minister’s Office that established the Israel-China task force, led by the National Economic Council and the Israel Export Institute. The task force has engaged in a dialogue with China covering the business sector, academia and government.

But nowhere were Chinese investments in Israel more than in the technological realm. According to a RAND Corporation study Chinese Investment in Israeli Technology and Infrastructure, between 2011 and 2018 Israel’s technology sector received the most Chinese investment, both in terms of monetary value ($5.7 billion) and the number of companies (fifty-four of the eighty-seven investments). This investment by mostly Chinese giants, whose relationship with the Chinese military and government is susceptibly profound, is more or less focused on companies and startups whose work can be redirected to enhance security, privacy and dual-use technologies. Chinese companies (such as Ali Baba, Baidu, Huawei, Lenovo, Tencent, Xiami, ZTE, GoCapital, and Ping An) have invested in various companies and startups (such as Tabula, Pixelot, SQream, Visualead, Hexatier, Canaan Partners, Thetaray, Kaymera, Toga Networks, and Pebbles Interfaces) whose technologies can be used to perform or operate, among other things, satellite navigation, data mining, surveillance and economic espionage, intelligence collection, digital media, cybersecurity/espionage, cloud storage, artificial intelligence, and machine learning.

Moreover, a closer look at Chinese investments reveals that China is also heavily investing in technology-financial (fintech) companies and startups, with the apparent objective of creating comprehensive financial ecosystems combining financial, health, social, banking, insurance, education, and service sectors. This investment increased as a response to and growth of China’s aspiration to dominate the internet including e-commerce and digital banking. This led China to establish Internet Plus to promote the integration of internet technologies. Ma Huanteg, Tencent Chairman and CEO, proposed Internet Plus, which was swiftly supported by the Chinese government. In December 2015, China’s giants Alibaba, Baidu, and Tencent, founded the China Internet Plus Alliance. They, along with other giants such as Ping An, created the prototype of a comprehensive “Financial Ecosystem,” merging healthcare, education, insurance, financial services, banking, and social services. Israeli companies provided cutting edge technology to China’s Financial Ecosystem. According to a report by Israeli investment company Viola Group, Israeli fintechs received nearly $1 billion in funding in 2018, roughly double 2017's $452 million. China is already the leading e-commerce trader and is expected to further expand its share in e-commerce at the expense of that of the United States

Taking all this under consideration, one could safely argue that China’s investment in Israel through its state-owned or state-affiliated companies is systematic and strategic. China, under President Xi, is thriving to rejuvenate China as the Middle Kingdom in the new era. In fact, the “new era” slogan dominated the Communist Party’s Congress in October 2017. Xi’s philosophy of the new era rests on building up the overall political, economic and military power of China and raising its profile in global affairs. This necessitates a commitment to developing a strong economy undergirding China’s aspiration of a great power. No doubt, Israel is a key aspect of China’s new era of great power status.

To be sure, China’s strategy in Israel is multidimensional. Israel is a core module for China’s BRI, going beyond the country’s interest in investing in the Middle East. Israel provides China a stable and fertile landscape for investment and trade. China is Israel’s largest trading partner in Asia and the third-largest after the United States. and the EU. Some observers believe that Israel’s trade with China may overtake Israel’s trade with the United States, especially following the discovery of huge gas and oil reserves in Israel’s Mediterranean basin. Israel provides China with a geostrategic foothold in the Middle East unencumbered by the politics of the Arab-Israeli conflict. Israel is a key country for BRI to prosper serving as a nodal transportation point to Asia, Africa, Europe and Arabian Peninsula. Significantly, Israel provides China with cutting edge technology including communications, internet and dual-use technologies. Chinese investment in these technologies, as the Mercator Institute for China Studies stated “speed up China’s technological catch-up and to leapfrog stages of technological development.” This poses a high-security risk to Washington by enabling China to become a world leader in cutting-edge technologies, both for commercial and military purposes, potentially undercutting American global supremacy and the international order it has helped create. In fact, Washington has been extremely worried about China’s investment in 5G, Internet Plus, and quantum technology. It is true that Washington still leads Peking in the paramount field of quantum computing. Nevertheless, Peking’s heavy investment in quantum technology could place it in the near future at an advantageous point than that of Washington. Similarly, this technological leapfrogging will also help crown China as the leader of e-commerce and digital banking, replacing the United States as the fintech powerhouse.