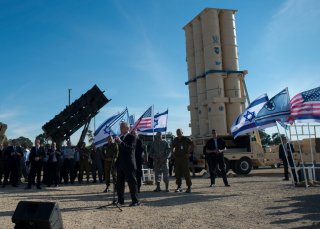 In February 2021, the Israeli Missile Defense Organization (IMDO) and U.S. Missile Defense Agency announced they were jointly moving forward with the design and development of the next-generation Arrow 4 air defense system—one designed to counter new types of long-range missiles that have yet to enter service in the Middle East.

Then in July, Arrow program lead Israeli Aerospace Industries (IAI) and Lockheed-Martin signed a memorandum agreeing to cooperate on the development, boxing out Boeing, which had co-developed the preceding Arrow 3. Reportedly, Lockheed will even take over production of additional Arrow 3 missiles.

The move reflects the intimate financial and technology-sharing relationship between Israel and the United States on missile defense development. Indeed, between 2008 and 2019, Israel reportedly received $3.8 billion in U.S. aid for the development and procurement of various aspects of the Arrow Weapon System.

Concept work on the Arrow 4 reportedly began in 2017. The Arrow 4 is intended to replace the preceding generation of Arrow 2 missiles in handling lower-flying short- and medium-range ballistic missile targets. Press surrounding the Arrow-4 suggests that it will also be designed to defeat maneuverable hypersonic cruise missile and glide vehicle type weapons, as well as somehow mitigate the threat posed by ballistic missiles that release multiple warheads, known as multiple reentry vehicles (MRVs) or multiple independently targetable reentry vehicles (MIRVs).

Israel is preoccupied with improving missile defense, as cruise and ballistic missiles are a likely means Iran might use to attack targets on Israeli soil. Between 600 to 700 miles separate the two country’s borders at their closest points, though Iranian forces in neighboring Syria are another vector.

Iran has steadfastly invested in creating longer-range and more accurate domestic ballistic missiles since the Iran-Iraq War, and more recently has begun using them aggressively in the Middle East, including to strike U.S. forces in Iraq. Though many Iranian missiles are inaccurate, some of the attacks also demonstrated a high degree of precision. That said, only a minority of Iran’s ballistic missile arsenal has the range necessary to hit Israel.

The Origins of the Arrow

Israel has a multi-layered air defense system designed to tackle a variety of different threats in a cost-efficient manner. The most famous component is the Iron Dome system designed to intercept the crude unguided rockets Hamas and Hezbollah periodically launch at Israeli population centers, sometimes in considerable volume. To tackle faster and/or higher-flying threats like aircraft and cruise missiles, Israel also fields David’s Sling and U.S.-built Patriot surface-to-air missiles.

Israel began developing the Arrow in the 1980s during the Iran-Iraq War when it grew evident that ballistic missiles would see extensive use in the Middle East. Test launches actually began just before the 1991 Persian Gulf War in which Iraq launched Scud missiles at Israel.

The Arrow 1, which was initially plagued by failed test launches, served purely as a tech demonstrator. But by the mid-1990s, Israel began developing a smaller Arrow 2 which entered service in 2000.

An Arrow’s two-stage rocket booster allows it to achieve speeds of up to Mach 9 (ie. nearly 2 miles per second), and it uses thrust-vectoring nozzles to adjust its course as it streaks towards an incoming missile during its midcourse flight phase, based on instructions received from the battle management center.

In the final phase, the missile releases a kill vehicle mounting both radar- and infrared- seekers to precisely smack the missile down. Even if a direct hit isn’t achieved, the missile’s proximity warhead can knock its target out of the sky from 40 to 50 meters away. If the target carries a weapons of mass destruction payload, it should be destroyed too high in the stratosphere for its payload to cause harm below.

While the Arrow 2 has since undergone four major upgrades, in 2009 Israel began developing the Arrow 3 which could reach higher-flying missiles and possibly even satellites. This was achieved by ditching the Arrow 2’s exploding warhead and relying purely on hit-to-kill technology, increasing its range to nearly 1,500 miles.

The Arrow 3 entered service in 2017, the same year an Arrow 2 destroyed a Syrian S-200 anti-aircraft missile mistaken for a surface-attack weapon. Two years later an Arrow-3 conducted a successful long-range intercept in a test in Alaska.

Statements by the Israeli Missile Defense Organization make clear it aims to steal the march on new hypersonic missile technologies developed by Russia and China before they are exported to or replicated in the Middle East.

Though ballistic missiles arcing well beyond the atmosphere have traveled at hypersonic speeds for decades (meaning faster than five times the speed of sound), the term today usually refers to weapons that fly at lower trajectories and with greater maneuverability, posing different challenges to missile defenses. These include hypersonic cruise missiles which remain within the atmosphere, and hypersonic glide vehicles which skip and glide just above the atmosphere before diving down on their target.

However, another technology the Arrow 4 is reportedly aimed at countering are missiles that release multiple submunitions, known as MRVs, or MIRVs, in their more sophisticated independently-guided form. Various ballistic missiles in service can carry anywhere from three to fifteen such separating warheads.

If regular ballistic missile defense is akin to shooting down a bullet with another bullet, trying to defend against MRVs is like trying to shoot down a spray of shotgun pellets with a bullet. In other words, MRVs not only spread out the damage further and more destructively, but also cheaply multiply the number of targets missile defenses must contend with. For this reason, North Korea appears to be developing an MRV-releasing missile.

There appear to be two counter-MRV methods under consideration. One is to intercept an incoming missile early before it can release its submunitions. Ensuring that may require even greater speed and faster detection and launch times.

The other concept is to have the anti-missile interceptor also release multiple kill vehicles. In fact, proposals for the United States’ next-generation interceptor apparently feature exactly that. Despite the obvious appeal of this counter, the problem remains that interceptor missiles and their sub-munitions will likely be much more expensive than the offensive weapons they are designed to stop.

Nonetheless, in the last decade, Israel has been successful so far in using expensive technologies to render indirect fire attacks from its enemies largely ineffective. That means that even as Iran improves the range and precision of its long-range missiles, it’s unlikely to achieve a reliable capability against Israel unless it manages to deploy them in large volumes or attack from some unexpected vector to overwhelm or bypass Israel’s multi-layered defenses.

Sébastien Roblin writes on the technical, historical and political aspects of international security and conflict for publications including The National Interest, NBC News, Forbes.com and War is Boring.  He holds a Master’s degree from Georgetown University and served with the Peace Corps in China. You can follow his articles on Twitter.