Israel Can Help the Gulf States Bolster Their Air Defenses 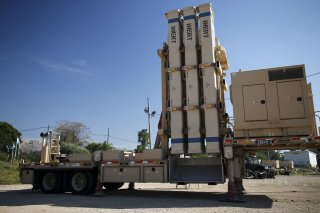 With the world focused on the war in Ukraine and a deeply problematic nuclear agreement with Iran taking shape, there is added importance to tightening the alliance between Israel and the countries of the Gulf Cooperation Council (GCC).

The recent missile and unmanned aerial vehicle (UAV) attacks by the Iranian-backed Houthis on Abu Dhabi have acted as a critical reminder of the need for the United Arab Emirates (UAE) to bolster its air defenses. The same likely applies to other members of the GCC, particularly Saudi Arabia.

Since Israel faces a similar threat profile, its systems could significantly bolster the air defense capabilities of the GCC countries.

The UAE’s recent $3.5 billion deal to purchase the South Korean M-SAM air defense system decreases the chances of it buying Israel’s Iron Dome system, although it does not rule it out completely.

According to a Western source, Saudi Arabia and the UAE have the region’s largest defense budgets and the most urgent need for air defense systems. The source said Israel could theoretically supply three types of air and missile defense systems.

A second option is to supply Gulf partners like the UAE with Israel Aerospace Industries’ (IAI) Barak family of air defense systems. This line offers high-quality products in long, medium, and short-range configurations against various threats, including ballistic and cruise missiles and attack UAVs.

The final option is Rafael’s Spyder family of short, medium, and long-range systems. Spyder is in service around the world with several clients.

It is also possible to create hybrid options between Rafael and IAI by combining Spyder and Barak systems of various ranges, according to the source.

The above represents the spectrum of available interception systems that can effectively handle the new air threats posed by Iran and its proxies.

The next step would presumably involve supplying detection systems. The principal challenge in countering low-flying attacking UAVs and cruise missiles is detection.

Israel can sell a wide array of radars and electro-optic detection systems. It can place them on aerostats, such as IAI’s Dew of the Sky High Availability Aerostat System (HAAS), which was unveiled last year by the Israeli Defense Ministry in northern Israel.

The HAAS was developed by IAI-subsidiary Elta and was produced by the TCOM, an American company. Its unique radar performs well against low-flying objects. “This type of airship could cover the whole of the UAE’s territory,” said the Western source.

Air-based radars would certainly compliment the UAE’s existing American-made Patriot and future Korean M-Sam systems. While the Korean-made radars are ground-based, tracking cruise missiles and attacking UAVs is best achieved with “an eye in the sky.”

Israel’s interest in supplying such systems is significantly broader than mere business interests. “Israel has a clear interest in strengthening the air defense capabilities of the UAE, Bahrain, and others in the GCC, as a fruit of the Abraham Accords,” said the source.

In general, such contracts today require not only a procurement agreement but also a willingness to work with local industries. This type of technology transfer creates a win-win situation for both sides, the source argued. If Israel wishes to cooperate with the GCC states on defense, there is no doubt that focusing on air defense systems is the most comfortable way of doing so, the source said.

The UAE currently operates American-made THAAD air defense systems, two types of Patriot Advanced Capability (PAC) systems, and Swiss-made Sky Guard radar-directed guns. The Saudis similarly possess PAC 2 and PAC 3 systems, THAAD systems, and Sky Guard 104 mm guns. The latter have reasonable capabilities but are not effective against modern low-altitude threats without the appropriate detection abilities, said the source. “We saw this was the case in the 2019 UAV attacks on Saudi Aramco oil sites that temporarily took out half of Riyadh’s oil export capabilities,” he noted.

Point defense short-range air defense systems that rely on electronic jamming and laser can be suitable for defending sensitive targets.

For a city, however, it is necessary to have defense systems that can intercept at ranges of at least ten to twenty kilometers.

The advent of long-range, slow-moving UAVs, which nevertheless have very precise strike capabilities, represents a revolution in military attack capabilities by adversaries, said the source.

Israel, for its part, will be closely analyzing the recent attacks in the Gulf and drawing the most detailed conclusions to learn from the incidents.

Yaakov Lappin is a publishing expert with The MirYam Institute. He is an Israel-based military affairs correspondent and analyst.