For Israel, the Iran Threat Extends Far Beyond Nuclear Weapons 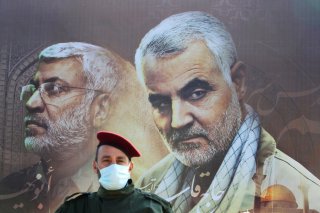 The problem with Iran’s nuclear program is that the previous Iran nuclear deal put a sunset clause on when Iran could start enriching uranium. That’s not helpful because it means eventually Iran will get to pursue a nuclear weapon, or be able to pressure the West into another deal. This is the cycle that now prevails.

Another issue that Israel is focusing on in strategy is a concept of “strategic proportionalism” which means holding Iran accountable for its proxies and making it clear Iran must not obtain a nuclear weapon. Iran has used proxies in places like Iraq as a kind of cut-out, to harass and attack U.S. forces but then express plausible deniability that these are not attacks directly linked to Iran. Israel is pragmatic in viewing the current “war between the wars” against these pro-Iranian group threats as a war that won’t be “won” in the conventional sense. These militias likely won’t leave a place like Syria unless there is some kind of big power agreement between Russia and the United States that the militias must leave and then Syria can be reconstructed.

Having U.S. support is vital for Israel, but Israel’s senior official also noted that the country has never asked the United States to do things for it. Israel can be counted on to oppose Iranian entrenchment and proxies. The concern is not only the consequences of Iran thinking it is empowered to increase its threats, but unintended consequences of other developments in the region. For instance, the Palestinian Authority is heading to elections and this could lead to Hamas winning again, as it did in 2006. That resulted in Hamas controlling Gaza and being sidelined in the West Bank. Since then, it fought three wars with Israel, in 2009, 2012, and 2014. Relative peace has now prevailed along the border with Gaza.

In short, Israel’s list of concerns is long, but it also views many of them as interconnected. A final reading of the current outlook might look something like this: U.S. support for Israel and countries like Egypt, Saudi Arabia, the UAE, and Bahrain, is vital. Iran’s nuclear program and Iranian enrichment are existential threats. There is no substitute for U.S. influence in the region, including in places like Iraq and Syria. A Hamas victory in Palestinian elections would be a bad outcome. Hezbollah’s leader Hassan Nasrallah should not threaten Israel with further provocations, like firing advanced missiles at drones. European commitment is important, as leaders like Angela Merkel who were close to Israel leave the stage there are questions about who will lead Europe in the future. More leadership by France’s President Emmanuel Macron is now essential in Europe, and it should mean support for Israel and Israel’s regional partners. This is all connected because appeasement of Iran’s role can have a domino effect empowering the Houthis, threatening Saudi Arabia, raising tensions in Iraq and Syria, fueling a potential clash with Hezbollah, and a rising cycle of instability or war.