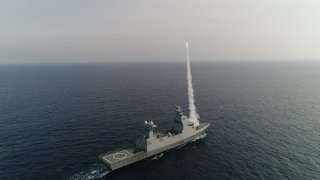 Israel completed its first test of the C-Dome air defense system aboard its new Sa’ar 6 corvettes on February 21. This important test is a milestone for Israel’s air defenses and the Iron Dome program. The original Iron Dome system became operational more than a decade ago and has intercepted thousands of projectiles. Israel has upgraded the Iron Dome to stop drones and other emerging threats. The system is the lower tier of Israel’s multi-tiered air defense. Israel’s other notable systems include the David’s Sling and Arrow. David’s Sling is similar to the Patriot system, and the Iron Dome is produced in the United States through a partnership between Israel’s Rafael Advanced Defense Systems and Raytheon.

The test at sea was carried out on the INS Magen. The Magen warship arrived in Israel in 2020 and is part of a new class of advanced ships that are capable of projecting Israeli naval power into the Mediterranean. However, the ships need to be safe from various threats, including missiles and drones. According to Israel’s Ministry of Defense, “the Israel Missile Defense Organization (IMDO), in the Directorate for Defense Research and Development of the Israel Ministry of Defense (DDR&D), the IDF, and Rafael Advanced Defense Systems have completed a successful series of live-fire tests of the ‘C-Dome’ system.” The Israeli Ministry of Defense said it was operated for the first time on the Sa’ar class ship.

“I commend the DDR&D, IDF, and Rafael for the completion of an unprecedented test. The systems that we are developing as part of Israel’s multi-tier missile defense array enable us to operate against Iranian proxies in the region and defend against their weapon systems, which are constantly being upgraded,” said Benny Gantz, Israel’s defense minister. “We continue to be two steps ahead of them and we will continue developing and upgrading our capabilities in order to maintain security superiority in the region and to defend the citizens and assets of the State of Israel."

According to Israeli officials, the test included drills and scenarios against a variety of threats, such as rockets, drones, and cruise missiles. Israeli officials say that the C-Dome can effectively stop these threats. Defending the marine environment is much different than defending against threats on land. Israel has faced threats at sea in the past, including missile threats to ships during the 2006 Lebanon war. The goal is to have various systems that can stop anti-ship missiles or sea-skimming and maneuvering missiles. Israel also has to defend gas platforms off the coast.

The C-Dome is developed by Rafael with a command-and-control system developed by mPrest. The system uses the Elta Adir radar. Elta is a part of Israel’s other defense giant, Israel Aerospace Industries. Israel’s famed “Iron Dome radar” has found customers in Europe in recent years. In addition, Israel had a major presence at the recent Singapore Air Show.

"The success of this test constitutes a significant technological breakthrough in the field of missile defense, and is the result of the Directorate’s vision and cooperation with the IDF and Israeli defense industries,” said Danny Gold, the head of the Directorate for Defense R&D in the Israel Ministry of Defense. Moshe Patel, the director of the Israel Missile Defense Organization, added that “the advanced detection system accurately identified various threats including rocket fire, cruise missiles and UAVs. The system successfully intercepted the threats with surgical precision. The success of today’s tests further strengthens our confidence in our missile defense systems as well as the ability of the Israeli Navy to defend the maritime assets of the State of Israel." Rafael executive Ran Gozali also praised the test. “This test marks the end of a process to develop and adapt the Iron Dome to naval platforms, according to the requirements outlined by the DDR&D and the IDF. The tests demonstrated Rafael’s advanced engineering and development capabilities, as well as the capability to successfully integrate complex systems."

The test comes amid rising drone threats in the region. Most recently, a Hezbollah-operated drone flew into Israeli airspace on February 18. Drones have also been used by the Iranian-backed Houthis to target the UAE. This year marked the first time Israel took part in the International Maritime Exercise, which included sixty countries and was led by the United States. Israel also drilled with the U.S. Navy, Bahrain, and the UAE in the Red Sea last year. Vice Admiral Brad Cooper, Commander of the U.S. Navy’s Fifth Fleet, said that a force of one hundred unmanned systems could constitute a regional drone task force, which Israel has expressed interest in developing. "By using unmanned systems, we can just simply see more. They're high-reliability and remove the human factor," Cooper said. Unmanned systems can cover gaps at sea where ships might not be present. In addition, Israel is considering a wider counter-drone partnership with countries in the region, the country’s Channel 12 reported.

In this context, the C-Dome exercise is important for Israel and the broader issue of regional and global air defense. During the same week as the test, SmartShooter, an Israeli defense company, announced that the Dutch military was acquiring its Smash AD counter-drone system. RT, another Israeli defense firm, also announced that an unnamed country in Asia had acquired its SkyStar 180 tactical aerostat system.