Israel Wanted a Global Hawk Drone, So It Is Building Its Very Own 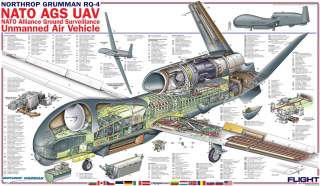 The smaller Eitan, built by Israel Aerospace Industries, weighs in at five tons and has a wingspan of eighty-six feet, almost as wide as a 1960s Boeing 737-200 airliner. On the other hand, the seven-ton Global Hawk, built by Northrop Grumman, really is a militarized 737.

Israel is building a giant drone comparable to America's RQ-4 Global Hawk, according to Israeli media.

The drone will be an upgrade of Israel's Eitan long-range reconnaissance UAV, the Jerusalem Post reports.

Upgrading the range and capabilities of the Eitan "will bring the drone to the scale" of the RQ-4 Global Hawk, the commander of the Israeli Air Force's Eitan squadron told the Post.

Another IAF officer told the Post "that it will be another several months before the improved aircraft are ready to start trial flights."

Both the Eitan (also known as the Heron TP) and Global Hawk are known as high altitude long endurance (HALE) drones. Otherwise, the Eitan, which first flew in 2004, doesn't bear that much of a family resemblance to the Global Hawk. They certainly don't look alike: the RQ-4 has that distinctive whale-shaped nose beloved of American drones like Global Hawk and Predator, while the Eitan is a twin-boomed design that looks a bit like a World War II P-38.

The smaller Eitan, built by Israel Aerospace Industries, weighs in at five tons and has a wingspan of eighty-six feet, almost as wide as a 1960s Boeing 737-200 airliner. On the other hand, the seven-ton Global Hawk, built by Northrop Grumman, really is a militarized 737. With a wingspan of 130 feet, it's actually wider than the 117-foot-wide 737-MAX, which debuted this year.

The Global Hawk can fly at 60,000 feet, the Eitan at just 45,000 feet. The Global Hawk also a staggering 12,000-mile range. Israel has not officially disclosed the Eitan's range, but unofficial estimates place its endurance at about 5,000 miles. However, the upgraded Eitan will be larger than the original, though it's not clear if it will be as large as the Global Hawk. “Everything about the next generation Eitan is bigger and better,” said an IAF officer.

Regardless of whether the Eitan bulks up to the size and performance of its American cousin, the fact that Israel is upgrading its long-range drones is significant. With the Middle East so volatile, the ability to dispatch a drone that can stay in the air for forty hours and scan large swathes of territory for things of interest to Israel, such as nuclear and ballistic missile sites, will be useful. Deploying an improved Eitan, at the same time that Israel is beginning to field F-35s, is a powerful combination.

It is also remarkable that a nation of less than nine million people, in a land the size of New Jersey, can be one of the few nations in the world—besides the United States and Russia—to operate airliner-sized HALE drones.