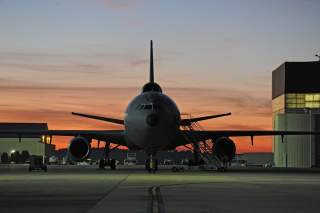 Drones are an increasing threat to airports, both civilian and military. Israel Aerospace Industries recently tested its Drone Guard at several international airports in Europe, Latin America and Southeast Asia and says that its system can help stop the problem. It points to the example of London’s Gatwick, which was shut down due to drones in December 2018, affecting more than 1,000 flights.

ELTA systems, a subsidiary of IAI, first unveiled Drone Guard in 2015 and has been perfecting it for the last five years to meet the growing threat. The recent tests involved using the system during operating hours during the height of activity.

Yoav Tourgeman, CEO of ELTA  says that the system is operational worldwide and was used at the G20 in Argentina in 2019. “We are proud to provide the system to some of the main airports around the world. Since Drone Guard  is lightweight, transportable and  easy to set up, we have been  able to meet these demands with an excellent level of performance.” In September 2019 the system was part of a NATO exercise in Portugal where its ability was measured to protect harbors against UAVs and other threats.

Drone Guard tracks, identifies and can disrupt hostile drones. It uses a 3D X-band radar that detects and tracks the drones and then classifies them. A separate camera system is used to spot the drone and a hammer can disrupt the drone. “The key advantage of the layered configuration is that it provides added protection should one layer fail. The system is specifically configured to operate in the airport environment  and has been demonstrated to the satisfaction of the airport operators.”

Because the system uses X-Band radar the leading Israeli defense company says that it doesn’t interfere with other airport radars. That means there is no need to shut down the airport necessarily in case of threats. The system is one of several Israeli companies have introduced. Israel is a leader in drones, having pioneered the technology decades ago in the 1970s. It’s defense industry behemoths are also leaders in the technology to track and kill drones.

Rafael Advanced Defense Systems makes the Drone Dome which was unveiled in 2016 and sold six systems to the UK in 2018. Elbit Systems makes a competing anti-drone technology called ReDrone. Israel’s defense ministry announced in early January that the country is seeking to perfect using lasers to stop drones.

Israel has faced drone threats from Hezbollah in Lebanon, from Hamas in Gaza and also from Iran’s Islamic Revolutionary Guard Corps in Syria. In February 2018 a drone flown from Syria entered Israeli airspace and was shot down by an Israeli helicopter after being tracked. In August 2019 a Hezbollah drone team tried to launch drones from near the Golan. They were killed in an airstrike in response.

In the Middle East, the drone threat has seen drone swarms used by Iran against Saudi Arabia and also ISIS using drones against U.S.-led Coalition forces.

The larger picture is that civilians use drones that can threaten airports by mistake and that cartels may use drones to smuggle goods. Drones are increasingly inexpensive and available and also becoming more complex. In this context, Israel’s technology is not only trying to defend the country from emerging threats such as Iran but also seeking to export its know-how to other countries.

Seth J. Frantzman is a Jerusalem-based journalist who holds a Ph.D. from the Hebrew University of Jerusalem. He is the executive director of the Middle East Center for Reporting and Analysis and a writing fellow at Middle East Forum. He is writing a book on the Middle East after ISIS. Follow him on Twitter at @sfrantzman. This article first appeared earlier last year.