Israeli Technology Can Help Defend Against Drones in the Gulf 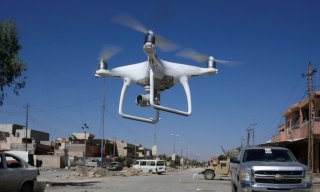 Israeli defense minister Benny Gantz visited Bahrain in early February. It was an important and symbolic visit in which he highlighted the new relations between the countries. “We have reached new heights today in Israel-Bahrain relations with the important meetings that took place and with the signing of the historic Memorandum of Understanding. We are building on the groundbreaking Abraham Accords and deepening ties between our nations,” he said.

At the same time, drone threats are increasing in the Middle East. Iran has used drones flown from Syria and Iraq to target Israel over the last several years. In addition, Iranian-backed groups have been behind several attacks on the United Arab Emirates (UAE). Israeli technology may now help countries in the region, including Bahrain, defend against drone threats. Israeli defense companies are leaders in air defense. One company named Skylock, which is part of the Avnon HLS Group, sees opportunity in Bahrain.

Avnon Group notes that “as drones have become more affordable and learning to fly a consumer model has turned into mere child’s play, rogue regimes and terrorist groups have begun tapping into this valuable entity. Attacks on world leaders and state espionage carried out from the safety of the open skies have become a real and present danger facing anti-terrorism units worldwide.” The Avnon Group, which was founded by Tomer Avnon, operates in four vectors: integrated solutions, technology, manufacturing, and venture capital. Active in over eighty countries, Avnon Group is dedicated to providing customized, national-scale solutions and technologies for governments, homeland security agencies, law enforcement, and special units in the public safety and security sectors, the company says.

Itzik Huber, CEO of Skylock Systems, says that his company has been living on a kind of “roller coaster” in recent months as the demand for protection from drone threats increases. “Drones are not just what kids play with but a tool that is very dangerous and can do a lot of damage and hurt people,” he says. “That is what has happened in the Middle East in [the] last weeks and months. Everyone knows and heard what happened in Saudi Arabia in [the] last several years with Houthis from Yemen.” He is referring to the Iranian-backed Houthi attacks on Saudi Arabia that have increased in recent years.

“A part of the Avnon Group, Skylock manufactures and exports systems that locate, identify and neutralize drones and UASs,” he notes. “Terrorists have become braver and more sophisticated than ever before; technology gives them the ability to hit targets that matter to us all.” He points to the recent attacks on Abu Dhabi as an example. The attacks have raised eyebrows in the region and taken the threat to a new level. Attackers also possess better technological capabilities today. Huber notes that with many countries facing these new threats, his company has business relationships in the Middle East and a subsidiary in Denmark that handles business in the region. That is because for many years Israel didn’t have relations with countries like the UAE and Bahrain. Now things have changed.

Awareness of the threat has “spread like wildfire,” Huber says. Skylock is a provider of counter-drone products, also known as “counter-UAS” solutions, in the UAE.

The warming relationship with Bahrain—including direct flights, connections, talks, and contracts​​—is also on the company’s radar. The Israeli defense minister’s visit was important in this respect.

Countering drones, whether in the Gulf or other regions, is generally done with the same approach. Skylock’s CEO explains that it begins with detection, which can be done effectively with radar. “The special component that makes this possible is called an IF detector, a long-range passive RF detector that detects any transmission from the drone to command and control,” says Huber. “It identifies the drone and its operator. Once recognition has taken place, the second phase of the optical solution begins. The system can see and identify which model and payload it is dealing with and understand what to do,” he says.

After identifying the drone as a potential threat, “the last step is the counter-measures which usually start with jamming the drone’s GPS and other communication channels. We have complimentary technology that fits this, including a striker drone (called “drone lock”) that works like a bullet against other drones by hitting them during flight, or our GPS based spoofing capability, which misleads enemy drones by transmitting phantom GPS signals, setting the drone off its course to a different location. The system also has various layers of detection, identification and mitigation,” he says. Skylock can detect drones out to a distance of around twenty kilometers.

The system works on using several solutions to counter drones, including blocking, spoofing, or jamming. The company is in the final stages of negotiations regarding a contract in Bahrain.

With the battlefield changing and drones becoming a widespread technology, it is believed that there will be more deals between Israeli companies and the Gulf countries—and more cooperation. Israel’s leading technologies matter here because Israel is innovative and quick to bring new technologies to market. On February 8, Israel’s Steadicopter unveiled what it calls the Black Eagle 50H, the first unmanned hybrid helicopter of its kind. It says the helicopter “enables energy efficiency through a combination of gas and electricity propulsion” and that “the highly-reliable helicopter has capacity to carry up to 12 kg of payloads and extremely long endurance for its category.” This is yet another technology transforming the arms race among countries that seek better unmanned systems and the systems to defend against them.