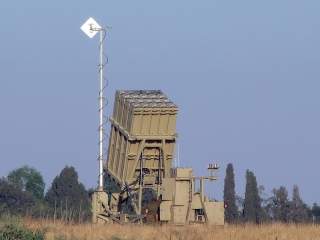 Key point: This system has been tested numerous times over past years and it has improved.

In 1991, during the Gulf War, more than forty Scud missiles were fired at Israel. At the time, the entire country was included in one early warning zone, so millions of people were warned of the incoming rockets, even though most of them lived in areas that were not threatened.

Today there are more than 1,700 distinct zones in Israel that enables the country to warn only the communities under direct threat. It is the latest development in Israel’s early warning technology and worked effectively during the latest round of fighting with Gaza.

In Operation Black Belt, Israel struck a senior Palestinian Islamic Jihad (PIJ) commander on November 12, leading to two days of rocket fire by the PIJ against Israel. More than 400 rockets were fired, reaching as far north as the outskirts of Tel Aviv, around 80 km away.

These are just some of the 2,600 rockets that have been fired from Gaza since March 2018.

Although dozens of Israelis were lightly injured in the recent round of violence, the system of sirens across the country helped guide people to shelters while enabling Israel’s air defense to intercept the projectiles. The sirens and alerts are often called “red alerts” and are linked to the IDF’s Home Front Command, which has become increasingly data and tech savvy.

This is based on a complex calculus.

Lt. Col. Idan Ochman, head of Israel’s systems development for J6—or Command, Control, Communications, Computers and Intelligence—deals with the latest technologies Israel is pioneering. He says that since the 1990s, Israel has continued to make its alarms more precise so only those who might be under rocket fire directly are sent to shelters. The latest version has been online for several months.

“We operated it earlier this year, but this was the first operational use. My branch is responsible for the technological aspects of the solution and we developed complex algorithm command and control system that gets the threats and decides which areas need to be alarmed.”

Israel uses loudspeakers throughout the country to sound sirens, but it has also sought to disseminate information through new social media platforms as well as radio, TV and the Internet. Most recently, the Israeli authorities began sending alarms via the Telegram app. Israel excels at hi-tech gadgets and  tech “startups,” so it’s natural that the military would gravitate towards these platforms.

One of the issues people faced in past conflicts is hearing the sirens when one is in a car or in a rural area. This has resulted in some casualties. During the recent round of conflict, I was driving toward Gaza from Jerusalem when a piece of a rocket fell near Gan Yavne. It wasn’t clear if drivers could hear a siren where it fell.

The IDF says that making the system more selective will save lives. “Our priority is always to seek to improvement whether it is to get to as many people and platforms that can supply alarms,” says Ochman.

The widespread use of smart phones should facilitate this approach even more. That means apps from the Home Front command can be useful to the public. Mapping apps and GPS now enable phones to know where users are, a process that has helped route traffic, for instance. But with Israel facing these unique threats, phones can help warn people. Apple’s website notes that “by default, government alerts are turned on for your device.” In the United States, this can mean things like weather emergency or AMBER alerts.

A second IDF officer involved with Israel’s early warning system confirms the advances Israel has made in making the alert system more selective and precise. This is important for communities close to the Gaza Strip whose alarms frequently go off when rockets are fired. When you divide a country into 350 polygons and then increase the number to 1,700, as Israel has done, it means that almost every small community can have its own alert, and cities can be subdivided. For instance, the IDF notes that the city of Rishon LeZion has been divided into several sectors. The alert that sounded in the city during the recent rocket fire affected only one fifth of its 250,000 residents, as opposed to all of them. Similarly, Tel Aviv now has four zones with around 500,000 people in each. Kibbutz Alumim in past conflicts has been alerted up to sixty times, but this round of violence sent the residents to shelters only twenty times. The IDF ascribes this to the new precision of the system. “It was a big improvement and we are thinking what we need to do to make the life much safer, and better,” says the second IDF office, who is identified as “Captain Y,” due to security reasons.

The overall system Israel uses to conduct air defense using its Iron Dome interceptors, radar and sires is complex and has been through major Gaza conflicts since 2012. Iron Dome’s interception rate is usually given as almost ninety percent. However, the sirens are activated irrespective of the interceptions. That means the system detects launches from Gaza, calculates their trajectory and alerts areas that are potentially in the path of the rocket. Not every rocket is intercepted, with some falling in open areas. The challenge Israel faces in a future war is that it may face an adversary such as Hezbollah that has an estimated arsenal of up to 150,000 rockets. Reports indicate that Hezbollah could fire between 1,200 and 1,500 rockets a day in a future conflict. In 2006, the same group fired around 4,000 rockets over thirty-four days, reaching a rate of fire of around a hundred per day. There was no Iron Dome system at the time.

Having more precise warning systems will enable Israel to alert the most correct areas during a future conflict. This system has been tested numerous times over past years and it has improved. Using the latest technology to reach civilians, on the roads or in the fields, will save lives. It is now a question of what technologies Israel’s adversaries will bring to the field and the IDF’s ability to anticipate the next threats.

Seth J. Frantzman is a Jerusalem-based journalist who holds a Ph.D. from the Hebrew University of Jerusalem. He is the executive director of the Middle East Center for Reporting and Analysis and a writing fellow at Middle East Forum. He is the author of After ISIS: America, Iran and the Struggle for the Middle East (forthcoming by Gefen Publishing). Follow him on Twitter at @sfrantzman. This article first appeared last year.