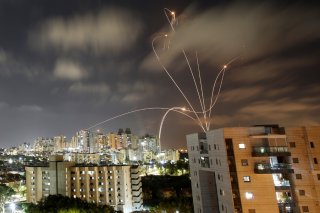 When it comes to weapons platforms, a trial by fire can be the best way to prove a system works, and this month Israel's Iron Dome was truly put to the test as the militant group Hamas fired more than 4,000 rockets over a ten-day period. In addition to stopping rockets that were aimed at targets in Israel, the Iron Dome successfully intercepted five unmanned aerial vehicles (UAVs) or drones in combat for the first time.

In a post on social media last week the Israel Defense Forces (IDF) shared images of the system successfully stopping rockets launched from Gaza. The volume of Qassam rockets launched in just over the week and a half period at the Jewish state was considerably intense. By comparison, over the course of the intense fifty-day conflict in 2014, some 4,881 rockets were fired, Business Insider reported.

Israel's Iron Dome is a mobile all-weather air defense system that was developed by Rafael Advanced Defense Systems and Israel Aerospace Industries. It was declared operational and initially deployed in March 2011 near Beersheba. It successfully intercepted a BM-21 Grad missile launched from Gaza just weeks later.

It was designed to eliminate aerial threats at ranges out to around forty miles in any weather condition. Each Iron Dome battery consists of three to four launchers with twenty Tamir interceptors as well as battlefield radar.

This past March, the Israeli Defense Ministry announced that it had completed an upgrade of the platform, The Associated Press reported. The IDF operates at least ten batteries that are deployed around the country. Each battery is reportedly protecting a medium-sized city from a missile attack.

The recent use of the Iron Dome may have just been the best sales presentation ever for a military platform, and according to Breaking Defense, it has sparked talks between Israel and the U.S. about additional procurement of the missile defense system for the U.S. Army.

"The fact that the Iron Dome intercepted big salvos of rockets launched from Gaza, as well as armed drones, is already creating big interest in the channels between the Israeli and the American defense ministries," a defense source told BD.

In August 2019, Israel's Ministry of Defense and the U.S. Department of Defense (DoD) signed an agreement for the purchase of a pair of Iron Dome batteries for the U.S. Army. Both of those batteries have been delivered, yet the service has been reluctant to acquire more – citing difficulties in integrating the Israeli technology to the American command-and-control systems.

However, Iron Dome has strong support in Congress and the recent use of it to stop the missile attacks – as well as to knock down multiple drones – should be a strong enough selling point to make the U.S. Army take another look at it.