The Istanbul Terror Attack Is More Than It Seems 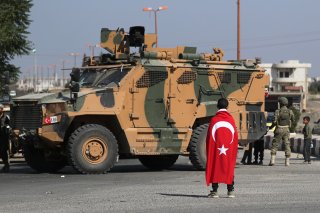 The question of who is responsible for the terrorist attack in Istanbul’s Taksim Square is becoming murkier by the day. What is increasingly clear is that the Turkish government is attempting to control the spread of information, prevent citizens and the press from asking basic questions, and openly demonize the United States by falsely accusing it of encouraging the attacks.

In a few short hours after the deadly bombing, which left six dead and over eighty injured, the Turkish government announced the arrest of Alham Albashir and informed the world that this Syrian-Arab woman was the perpetrator of the attack. What’s the evidence? We are led to believe that it is an easy case to prove. Albashir can be seen on security camera footage planting the suspicious package that was, in fact, a bomb. Subsequent information released about her indicated that she was trained by the PYD, a Syrian-Kurdish group, and had been living in Istanbul for the past year. The PYD is affiliated with the Kurdistan Workers Party (PKK), a separatist terrorist organization that has waged a four-decade-long secessionist campaign inside Turkey to establish a Kurdish homeland. Hence, the line that the Turkish government wants us to believe is simple: a PYD-trained terrorist with Kurdish ties is responsible for the bombing.

While this explanation is alluring to many Turks, it leaves a number of questions unanswered. First, a terrorist trained in bomb technology who had resided in Turkey for over a year had the tact to plant a bomb, get caught on camera, and then return to her apartment, allowing the police to apprehend her. Why go to the trouble of planting a bomb and then leave yourself open to immediate arrest? Second, what is the connection between her Syrian-Arab identity and her affiliation with the PYD? The PYD is a Kurdish organization. What is the motive of a person of Arab identity carrying out an act of terrorism for a group that has never carried out attacks on Turkey and dedicated itself to fighting the Islamic State (ISIS)? Third, what acceptable reason can the government of Turkey offer for slowing down the internet and constraining bandwidth on social media platforms immediately following the attack? Surely, the free flow of information to keep citizens aware would have been the rational strategy. Finally, the PKK and the PYD both denied complicity in the attack. While this might be the expected response from any suspected entity, it’s worth bearing in mind two things. The PKK has always claimed responsibility for attacks it has carried out in the past, such as the Mersin bombing in September 2022. Accepting responsibility for an attack is also the means by which terrorist organizations achieve their objectives. Secondly, the PYD has never carried out or threatened to carry out an attack against Turkey; it is a staunch U.S. partner that proved to be decisive in militarily defeating ISIS.

This is followed by the government’s attempt to point fingers and demonize the United States. Turkey’s interior minister, Suleyman Soylu, quickly rejected a message of condolence issued by the U.S. embassy. In his remarks, Soylu added that “accepting condolences from the United States “is like the murderer being the first to arrive at the scene of the crime.” Furthermore, mainstream TV stations throughout the country ran Soylu’s message on repeat and declared that a U.S.-supported PYD terrorist carried out the horrific attack. This was mirrored by the cheap tactic of showing photos of the alleged bomber wearing a purple sweatshirt with the inscription “New York,” which was presumably intended to convince Turkish viewers of America’s complicity in the attack.

While the interior minister drilled down on blaming the U.S. at home, President Recep Tayyip Erdogan was meeting with President Joe Biden at the sidelines of the G-20 summit, where Erdogan asked for Biden’s continued support for Turkey’s purchase of brand new F-16 fighters, which will likely support Turkey’s fight against terrorism. One cannot help but see through the insincerity of the Turkish government. On the one hand, it seeks Washington’s help to shore up its counterterrorism defenses, while on the other, it accuses the United States of facilitating a terror attack against Turkey. Ankara wants the whole world to believe the terror attack was carried out by the PKK terrorist organization, while at the same time continuing to host representatives of Hamas inside of Turkey and refusing to designate the group as a terrorist organization. This is simply unacceptable, duplicitous, and insincere.

With a government that is bent on silencing the media, placing limits on the ability of individuals and journalists to ask legitimate questions, and peddling false accusations, an equally plausible explanation is the argument that this was a false flag operation perpetrated by the Justice and Development Party (AKP), Turkey’s ruling party. To be clear, there is no concrete evidence to suggest this, but many are quietly asking if this could be the case. Less than twenty-four hours after the bombing, T24, a reputed and widely quoted news outlet in Turkey, ran an article stating that several telephone conversations took place between the alleged bomber and a member of the ultra-right-wing Nationalist Action Party (MHP), a coalition partner of Erdogan’s governing majority. What possible innocent explanation could there be for a representative of the government of Turkey having conversations with a person who would go on to carry out a terrorist attack? The representative in question stated that he was the victim of identity theft and that a phone line had been opened in his name. This mere denial does not exonerate him.

Additionally, the Turkish government has signaled its intention to mount a heavy response against the PYD, presumably indicating that a military incursion into northern Syria may take place. The Turkish public, understandably frightened and angry, is looking for a strong response from the government. Erdogan might just be able to deliver. A beleaguered leader who is facing re-election in several months—in the midst of the worst economic downturn in the country’s history—could have manufactured the perfect crisis to deflect public attention away from consumer inflation and toward a decisive stance against terrorism. In the absence of any contravening evidence, is it too much to imagine that actors affiliated with the Turkish government paid a Syrian Arab woman to simply place a package at a predetermined spot, without her knowing there was a bomb inside it?

In the event this sounds fantastical, I only need to add that this explanation is just as plausible as the story offered by the government itself. Erdogan’s back has been against the wall since Turkey’s election cycle began. This possibly manufactured attack has allowed the narrative about Erdogan to swing away from all the negativity surrounding the country’s economic woes back to where he wants it. Erdogan can now present himself as a strong leader who can defend the country against terrorism. We must not take the Erdogan government at its word. We need more answers.

Sinan Ciddi is a non-resident senior fellow at the Foundation for Defense of Democracies (FDD), where he contributes to FDD’s Turkey Program and Center on Military and Political Power (CMPP). He is also an Associate Professor of Security Studies at the Command and Staff College-Marine Corps University and Georgetown University’s School of Foreign Service.