It’s Hard Developing an Aerial Tanker for the Military. Ask Airbus and Boeing. 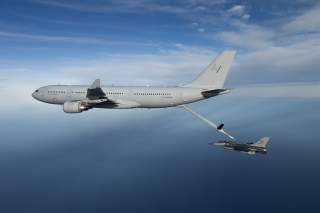 Building a modern military aerial-refueling tanker is hard. It takes time, money and trial-and-error. A lot more of all three than once was the case.

That’s an important truth that’s worth keeping in mind as American plane-maker Boeing falls farther behind in its effort to supply new KC-46 Pegasus tankers to the U.S. Air Force.

Boeing in 2011 won the contract to supply as many as 179 KC-46s to the Air Force. The deal, which followed repeated failed attempts by the U.S. Defense Department to acquire a new refueler, could be worth as much as $40 billion.

But problems with the KC-46’s refueling boom and other systems have delayed the type’s full entry into service. Boeing has delivered dozens of Pegasuses to the Air Force, but service officials admitted that it could be years before the tankers are ready to support front-line forces during combat.

Early aerial tankers were simply old bombers or airliners that trailed hoses or carried simple booms. But to keep up with increasingly speedy fighters and bombers, the U.S. Air Force in particular needed an equally fast tanker.

The KC-46 with its more modern 767 airframe improves on the KC-135’s range, payload and efficiency. But to understand why the Pegasus has been so difficult to develop, consider the example of the Australian air force, which in the early 2000s commissioned Airbus to develop a new tanker version of the A330 airliner.

“When Airbus set out to convert the A330 into a [KC-30] Multi-Role Tanker Transport, they knew it was a big undertaking and prepared for it,” Hamilton wrote.

The company designed its own boom and a built a ground-based test bed, as well as converting an A310 flying test bed, which flew in 2004. That would allow it to have the refuelling systems ready ahead of the A330 MRTT's scheduled first flight in late 2007.

The first A330 MRTT was converted into a tanker in Spain and first flew in August 2007 -- ahead of schedule. Issues had been identified in testing but they were being addressed. Folks were optimistic and Airbus was bullish -- they wanted to win the U.S. tanker order for 179 jets.

Airbus didn’t actually win the U.S. order, but other countries besides Australia opted for the KC-30, making the program a top priority for the company. But the new tanker’s development proved more difficult than some observers perhaps expected.

Modern tankers are more complex than they might appear. Even when they’re based on a proven commercial airframe. “Don't think of the boom as just another system bolted on the tanker,” Hamilton explained. “Think of it as another little aircraft that flies whilst attached to the bigger aircraft.”

“Any design changes -- whether it be with software, structural or aerodynamic -- that need to be made to the boom will have repercussions on the other two elements,” Hamilton wrote. “If they're not synchronised, the best-case scenario is the boom will fall off the tanker.”

The Royal Australian Air Force’s KC-30s fell behind schedule. “Scheduled delivery of the first tanker bumps into late 2008,” Hamilton wrote. “The first A330 to be locally modified arrives in June 2008. [Initial Operational Capability] is forecast for late 2009. But delays keep mounting. More modifications are required. Then need to be flight-tested.”

By 2010, MRTTs were rolling out of the conversion center in Brisbane and going to Europe for developmental testing. The RAAF “wasn't going to accept the tanker unless it was ready,” Hamilton wrote.

“Then in January 2011, there's an unfortunate incident. The boom on the first KC-30 detaches during a trial refuel with a Portuguese F-16. Both jets recover -- and the boom's maturity -- after seven years of testing is called into question by many spectators.”

“There are now several 'completed' KC-30As from the conversion centre in Spain, and the RAAF elects to start accepting delivery in Australia. The first KC30A will remain in Spain for testing, but KC30A A39-003 and -002 in that order arrive in Australia in June 2011.”

In February 2013, the RAAF finally declared IOC. “We have four jets, can provide hose-and-drogue refuelling and air logistics support. But the project -- and the boom -- is still on the project-of-concern list.”

In December 2013, Warren McDonald took over as commander of the RAAF’s Air Lift Group. “One of Macca’s priorities? Get the boom done already,” Hamilton noted.

By then there were four KC-30As in Australia and the fifth was still testing the boom in Spain. “The program is five-to-six years late, depending on your metrics,” Hamilton tweeted. “Macca sends another KC-30A back to Spain to aid in the test program.”

In August 2014, a KC-30 supported its second Pitch Black aerial war game, flying missions long distance to support Australian and allied fighters. “Barely a week after the exercise, the government announces an air task group will deploy to the Middle East to fight [Islamic State].”

“The scale and speed of this deployment was unfathomable 10 years previously.” It took years of trial and error, but Australia finally got its new tanker. America should, too, in time.