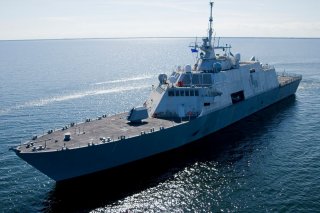 The first four of the Navy’s notoriously expensive Littoral Combat Ships have under a year of service life left in their hulls. The announcement by Vice Admiral J. W. Kilby, Deputy Chief of Naval Operations listed March, 31, 2021 as the ship’s projected inactive date.

The LCS ships are made up of two classes, the Freedom-class and Independence-class. Both classes were intended to operate in littoral environments near shore and were designed to be highly flexible with easily swappable modules for different mission objectives. Rather than returning to the United States to be refitted for a new mission, the ships’ mission modules—mine sweeping, convoy escort, fire support—could be swapped out while at sea, at least that was the idea. But not all of the ship’s mission modules are finished.

Naval shipbuilders designed the Independence-class with a unique trimaran hull design. Unlike conventional hulls, the trimaran design has a larger central hull and two smaller outrigger hulls on either side and is designed to reduce hydrodynamic drag. In addition, the class’ hull and bridge are sharply angled for a reduced radar profile. The design has had some problems though. One of the biggest problems? Hull corrosion caused by salt water. But the problems don’t stop there.

Three Freedom-class ships suffered irreparable damage after seawater penetrated their engine gaskets, causing them to rust. Another Freedom-class ship broke down sailing from San Diego to Nova Scotia when its clutch failed to disengage. One Independence-class’ drive shafts were damaged. Both classes have also suffered from massive cost overruns and have been criticized for their low level of survivability.

In a Department of Defense press briefing, Rear Admiral Randy B. Crites, Deputy Assistant Secretary of the Navy for Budget, explained that one of the biggest challenges facing the LCS fleet was financial. “Those four test ships [the LCSs] were instrumental to wringing out the crewing, the maintenance, and all the other things that we needed to learn from them, but they’re not configured like the other LCS and they need significant upgrades,” he stated. “Everything from combat to structural to you name it. They’ve got it. It’s expensive to upgrade them.”

Furthermore, as a class, the LCSs have already contributed virtually everything they could have to the Navy. “The four LCSs that we’re talking about, we’ve essentially got all we can get out of those ships in terms of testing,” Crites emphasized.

Lastly, according to Crites, the class just wouldn’t be able to duke it out in a high-end fight “You know, they’re [the LCSs] not unimportant. Just in great power competition they were less important. And so, that’s why we took those savings and applied it to other areas.”

As the United States shifts focus away from grinding land warfare in the Middle East towards great power competition in the Pacific, both Littoral Combat Ships’ usefulness lessened. Surviving a high-end fight against the Chinese PLA Navy would have been difficult if not impossible—hence the slow rollout of the Navy’s FFG(X) ship. Stay tuned for more.