It Only Gets Better: The F-35 Is Becoming More Lethal and Affordable 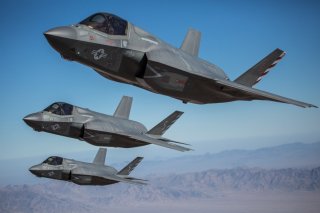 The F-35 Joint Strike Fighter (JSF) is the world’s premier fifth-generation air platform. Its performance is unmatched by any existing fourth-generation aircraft as well as the so-called fifth-generation systems being deployed by Russia and China. After some significant teething pains and years of having its viability and affordability questioned, the F-35 is on a course to become the dominant fighter of the twenty-first century. The aircraft has proven itself not only in exercises but also in combat deployments. More countries are signing up to be members of the JSF club. They are doing so not only because of the F-35’s demonstrated performance but because it is more affordable than many of the best fourth-generation aircraft. Year after year, the JSF program has managed to reduce the acquisition costs for new lots of aircraft while improving its capabilities.

These successes are all the more remarkable given that it is still a relatively young program. It is just on the verge of entering Full Rate Production. The three variants of the F-35 are only now entering service with the U.S. military and those of allies and partners in significant numbers. The role of the F-35 in multi-domain operations is being realized as the aircraft is paired with long-range fire systems and air defenses. The global sustainment network for the JSF is still in the process of being stood up.

The JSF is continually evolving. Planned investments—including Block 4 and Technology Refresh 3 hardware and software upgrades, an improved engine, a revamped logistics information system, and new maintenance techniques—will markedly improve the aircraft’s performance and expand the array of weapons it can employ while reducing further sustainment costs. The aircraft’s electronic warfare capabilities, critical to its ability to engage in high-end fights against advanced air defenses, also are being enhanced.

Even in its earliest instantiations, the JSF proved to be a unique platform in both air-to-air and air-to-ground roles. At several Air Force Red Flag exercises conducted before the Covid-19 pandemic, the combination of the JSF’s stealthiness, advanced sensors, and unique communications capabilities allowed it to rack up an impressive ratio of air-to-air kills. In the 2017 Red Flag, before the current Block 3 upgrades were introduced, JSFs achieved a twenty-to-one kill ratio. In the 2019 exercise, F-35s equipped with more modern hardware and software did almost as well in unequal engagements against superior numbers of aggressor aircraft. The introduction of new sensors, computers, and weapons with the Block 4 upgrade will enhance the JSF’s lethality in the air as well as its ability to improve the operational performance of fourth-generation fighters.

The same phenomenon is occurring in the JSF’s role as a strike platform. The U.S. Air Force deployed the JSF almost continuously for several years for operations against ISIS and Taliban forces. Israel has successfully employed its handful of modified F-35s over Syria which has one of the deadliest air defense environments in the world. Continual advances in sensors, electronic warfare capabilities, and weapons will allow the F-35 to stay ahead of evolving air defenses and pursue high-value mobile targets.

Perhaps the most revolutionary role for the F-35 is as a forward-deployed sensor platform providing real-time intelligence, surveillance, and reconnaissance, (ISR) and targeting information for ground-based fire systems and air and missile defenses. Early on, the Pentagon demonstrated the ability to employ the F-35 even without advanced networks to support ground-based fire systems. More recently, the U.S. Army demonstrated this capability in its 2021 Project Convergence exercise to rapidly take near-real-time data from an F-35 and pass it to an artillery unit that was able to fire in a matter of seconds.

As the program is building more aircraft for the United States and foreign buyers, both the acquisition and sustainment costs of the F-35 have dropped sharply. The cost of the most common variant, the F-35A, has steadily come down for more than a decade and now is below $80 million a unit. This compares to a unit price of nearly $220 million when the first model rolled off the assembly line in 2007. Thailand, which is considering acquiring the F-35, concluded that it would be cheaper than the Swedish Gripen, which is considered one of the best fourth-generation multi-role fighters.

Sustainment costs for the JSF are coming down as well. The program is targeting a 10 percent reduction in flying hour costs by 2023. Incremental improvements in the platform’s Autonomic Logistics Information System are being implemented to further reduce sustainment costs. Switzerland, which recently decided to acquire thirty-six F-35As, concluded that sustainment costs would be $2 billion less than competing but less capable aircraft.

When the JSF program began, it was assumed that there would be a process of sequential, even continuous improvements. As hardware and software improved, new block upgrades would be inserted into the production line and retrofitted on older aircraft. Currently, the program is working to introduce the Block 4 and Technology Refresh 3 upgrades, the set of hardware and software improvements that will radically improve the aircraft’s combat performance and aerial sensor ability. The U.S. Air Force is slowing down procurement of the F-35A in order to take advantage of Block 4 when it becomes available at the end of the decade.

The program also will improve the platform’s power plant. The Department of Defense is considering two alternatives. The first is the Engine Improvement Program which would enhance the capabilities of the proven Pratt & Whitney F135 engine and be available for all three JSF variants. The other is to replace the existing engine with the product of the Adaptive Engine Transition Program, an engine that would not be available on the U.S. Marine Corps’ STOVL variant, the F-35B.

While the JSF program faces challenges implementing its various upgrade programs, it is making progress on other fronts. It is also adding more users, including most recently Germany, Poland, Finland, and Switzerland. As a result, the F-35 is likely to dominate the advanced tactical fighter world for decades to come.