Is It True That Some Hong Kong Protesters Are Building Homemade Bombs? 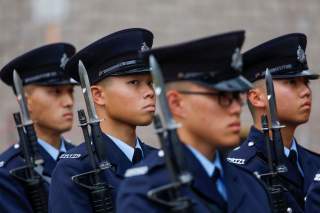 During a raid Jan. 14 on an apartment in the Mong Kok neighborhood of Hong Kong, police found protest-related material such as masks, protective gear and, most notably, an 8-inch long pipe bomb filled with 40 grams of low explosive powder. During the raid, the bomb disposal team arrested 10 people — one of whom led police to another property in northern Hong Kong where they found an additional 100 grams of explosive material.
The Jan. 14 seizure, however, was not an isolated case. Indeed, it was at least the seventh incident involving explosive material since anti-government protests began in June 2019. The police's close monitoring of bomb threats will continue to make it difficult for any single individual or group to make a truly sophisticated device. But that won't keep increasingly desperate protesters from pursuing deadlier weapons as they try to turn up the heat on the city's political leaders.

Explosive vs. Incendiary Devices
It is important to distinguish between the recently discovered explosive devices and the ubiquitous incendiary devices that Hong Kong protesters have been using against police for months. Gasoline bombs, commonly known as Molotov cocktails, are glass bottles filled with an accelerant such as gasoline that can be lit and thrown 30-50 feet and ignite upon impact. Protesters in Hong Kong have used gasoline bombs by the thousands, and the city's police forces have equally seized them by the thousands. 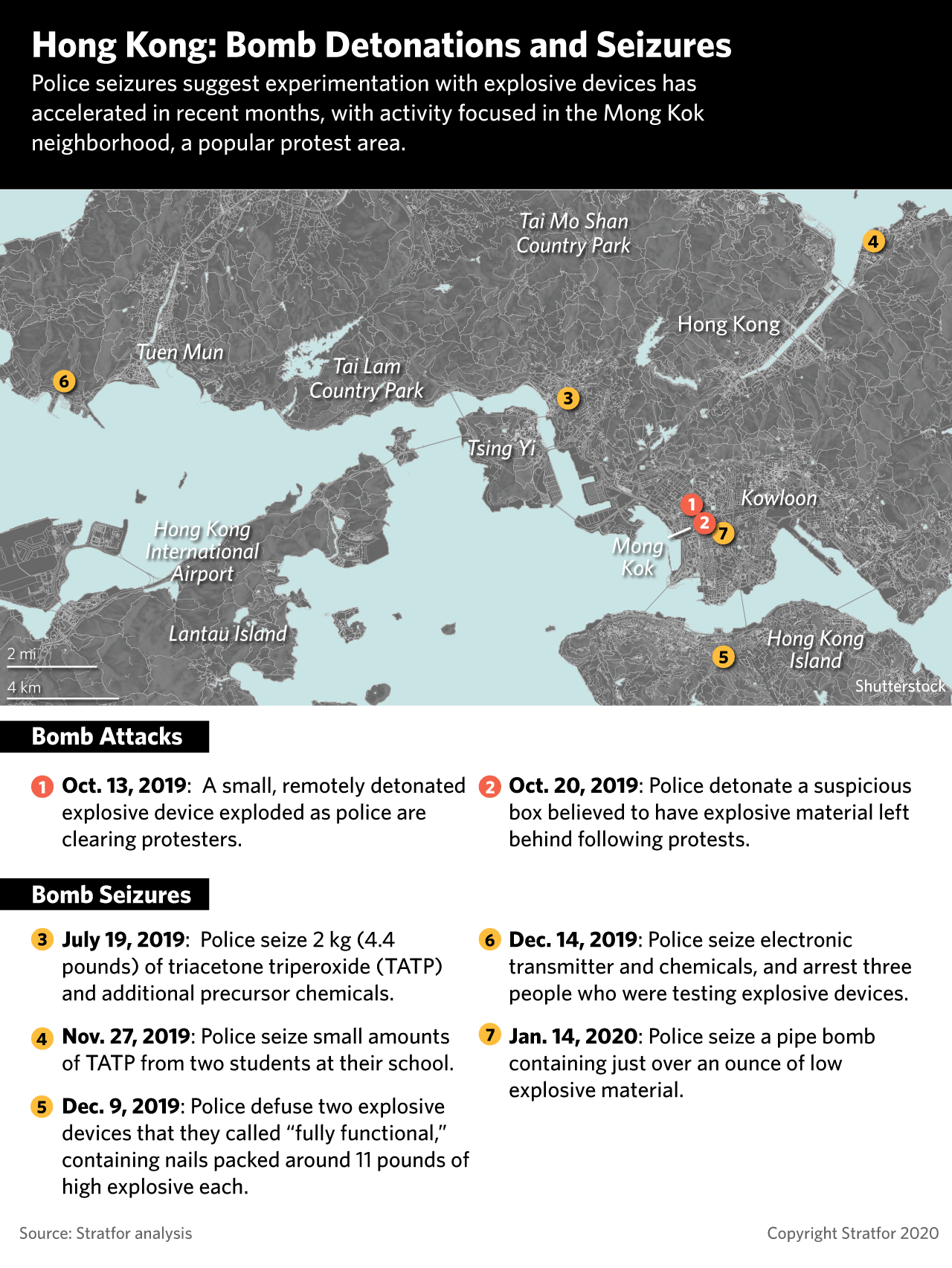 In November, security forces also discovered butane tanks taped with nuts and bolts on the Hong Kong Polytechnic University campus. But these were obviously hoax devices, as there was no apparent firing chain that would have detonated the tanks, nor was it even clear that they had fuel inside of them. While such artifacts make for good photo opportunities, they pose a minimal threat to police or the general public. Explosive devices, however — such as the recently discovered pipe bomb — have the potential to be more destructive and deadlier. And because of this, they also involve a more acute psychological element of fear that makes them more associated with terrorism.

In gauging the bomb threat in future Hong Kong protest activity, there are two key trends to unpack from the seven protest-related seizures of these explosive devices:

1) The tempo of incidents appears to be increasing. Overall protest activity has slowed following the university sieges in mid-November. But four of the seven bomb-related discoveries have occurred since the current lull in protest activity began. Even though Hong Kong protests are no longer dominating the headlines, the underlying grievances are still very much alive and at least some elements of the radical protest movement are experimenting with ways to increase aggression. Hong Kong protests have ebbed and flowed over the seven months since they started, with each resurgence accompanied by new, more aggressive tactics against police and government targets in an effort to increase political pressure and force them to concede to protesters' key demands.

2) Devices also appear to be getting bigger and potentially more sophisticated. While the explosive devices left behind at protests in October appear to have been little more than improvised fireworks, subsequent seizures in November and December have seen a return to the use of the explosive material triacetone triperoxide, or TATP. The devices have also been packed with shrapnel around larger charges of high explosive and reflect a more deliberate effort to experiment with the design of explosive devices and effective detonation mechanisms. Students make up a large proportion of the more radical protest elements, many of whom have science and technology backgrounds that could help in their efforts to construct explosive devices. There is also evidence that they have used access to university science labs to support protest activity. Such labs could be sources of controlled chemicals used to make explosive materials such as TATP. If protesters can successfully synthesize homemade explosive compounds and learn how to detonate devices remotely, they could start deploying bombs against police or other targets in Hong Kong.

However, there are also limitations to the effective use of explosive devices in Hong Kong protests. While the devices and components discovered since November appear to be more dangerous, there remains no single individual or group behind the construction of explosive devices. This is largely because each discovery of a new device or bomb lab has been accompanied by arrests and seizures of components, helping ensure that no group is able to continue experimenting with explosive devices.

The Hong Kong police force appears to have strong intelligence on the bomb threat within the protest movement, forcing each next group to tackle a steep and risky learning curve for handling homemade explosive material and constructing explosive devices. Having to start from scratch after each police seizure will make it more difficult for any single individual or group to make a truly sophisticated bomb — much less achieve any kind of consistent bombing campaign. Thus, even if protesters are able to deploy explosive devices on one occasion, it is very unlikely that they would be able to replicate it.

The adoption of lethal tactics could be a red line for many Hong Kong citizens and jeopardize the protest movement's popular support. As evidenced by the victory of pro-democracy parties in Nov. 24 local elections, most Hong Kongers oppose the current government and its policies, and so tolerate the current protest campaign and the occasional disruptions to daily life caused by the more radical elements of the movement. While there have been a handful of deaths associated with the latest protests, there has not yet been a systematic effort on either side to use lethal force. But if protesters were to adopt the use of explosive devices — especially highly deadly ones involving large amounts of explosives packed with shrapnel to increase the chance of serious injuries — it could undermine the popular support that the protest movement enjoys. Bombs are also less discriminate in their destruction and would be more likely to cause collateral damage.

But judging by the number of incidents involving explosive devices in recent months, it is clear protesters are experimenting with more lethal tactics regardless of the strategic risks. The anti-government protest movement in Hong Kong does not have a centralized, strategic planning structure, meaning there is no top-down leadership that can advise on the strategic advantages or disadvantages of adopting lethal force to keep up the pressure on the Hong Kong government. Because it is largely a grassroots effort, entrepreneurial protesters push the envelope on their own and only get feedback on their tactics after the fact. Over the past seven months, we've seen increasingly desperate, frustrated and more radicalized protesters lash out in sometimes self-defeating ways. And using explosives against targets in public places could be the next example of such escalatory behavior.

Assuming that radical elements of the Hong Kong anti-government protest movement continue to experiment with explosive material, and the no political resolutions are reached in the near future, the use of an explosive device in future protests remains possible. Given the limitations on Hong Kong bombmakers, however, it's unlikely protests will be able to detonate devices large enough to cause massive destruction. But bombs like those discovered Dec. 9 would be more than adequate to cause lethal injuries to anyone located near the explosion. As protesters look for new ways to increase pressure on the city's political leaders, the use of bigger, more damaging explosive devices is a realistic option for escalation that could put police and civilians alike at elevated risk in the months ahead.

Are Hong Kong Protesters Turning to Bombs? is republished with the permission of Stratfor Worldview, a geopolitical intelligence and advisory firm.