As Its Economy Worsens, Zimbabwe Teeters on the Edge of Chaos 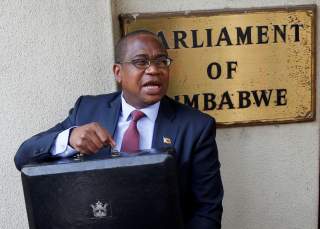 After a trying 2019, 2020 looks to be no better for Zimbabwe as a foreign currency shortage continues to ravage its import-reliant economy. Fuel and food shortages spurred angry protests that ended in a violent security crackdown in January 2019. Ever since, President Emmerson Mnangagwa's administration has tried to address Zimbabwe's systemic economic weaknesses by floating and reshaping its currency and restricting the use of the U.S. dollar — but to no avail.  Desperate for revenue, the government is also now attempting to attract mining investment. But the windfall from such efforts will take years to materialize — years Mnangagwa's administration may not have, especially if Zimbabwe's deteriorating living conditions end up turning his own security forces against him.

The Search for Revenue

Zimbabwe's current financial crisis, driven largely by its trade deficit, initially became apparent through the skyrocketing black market rate of its local currency, the Zimbabwe dollar, against the U.S. dollar. In February, the government tried to relieve pressure by floating the bond notes but doing that without sufficient reserves has only caused the exchange rate to slip further.

Additional setbacks in agriculture and mining revenue over the past year have also exacerbated Zimbabwe's financial situation. Drought, armyworm infestations and shortages of crucial farming supplies, such as fuel for equipment, have threatened this year's harvest of tobacco, one of Zimbabwe's main sources of foreign currency. Following disappointing revenue from 2019 tobacco sales, the government has made regulatory adjustments that should allow farmers greater access to foreign currency and direct imports of fuels. But at best, these efforts will be able to only to restore a pre-existing source (albeit an important one) of foreign currency.

The Zimbabwean mining industry, however — which produces chromite, platinum group metals, gold and diamonds — stands a larger chance of restoring the country's depleted foreign currency reserves. But the country’s greater economic weaknesses still pose a significant barrier to growth, which has deterred foreign investment into its mining sector. And as a result, the country's mining input has dwindled amid the subsequent lack of new production coming online. That said, Mnangagwa's administration has been lobbying heavily abroad for new mining investments. And there are some signs that, with time, those investments could help revive the country’s economic fortunes.

To address Zimbabwe's more urgent needs for fuel, Mnangagwa is also allegedly negotiating a diamonds-for-oil swap with Russia. Other potential investments in Zimbabwe’s mining industry, particularly for platinum and even exploration for rare earth elements, have even more potential to rectify the country's systemic foreign currency shortage. But again, it's highly unlikely that those types of investment projects would mature within the next year.

Until then, Harare will thus have to muddle through the domestic blowback of an elevated cost of living. Zimbabwean workers, being paid in hyperinflated Zimbabwe dollars, are finding it increasingly difficult to make ends meet. In many cases, the costs associated with their employment (such as transport to and from work) are consuming most of their paychecks. Earnings paid in foreign currency have somewhat helped cushion workers in the country's mining and tobacco sectors. But the hundreds of thousands of Zimbabweans employed in the country’s large public sector are facing significant cuts in their buying power.

Government workers have begun demanding either pay raises or payment in U.S. dollars. The country’s junior doctors have been on strike since early September and were recently joined by senior doctors as well. While the Zimbabwean army has since deployed its own medical personnel to help fill the gaps, there are signs that Zimbabwe's healthcare system is beginning to collapse under the weight of the ongoing strike and critical shortage of doctors. Teachers, meanwhile, have also limited work to just two days a week.

But even if it wanted to, the government currently lacks the cash to appease workers. Thus, with no solution in sight, the possibility of expanding strike actions and protests continues to grow. In mid-October, Zimbabwe's public sector unions warned that its members couldn't perform their duties under the current conditions. Since then, a significant share of civil servants has nonetheless continued to work. But if economic conditions or labor action encourages more workers to stay home, it could paralyze public services across the country — thwarting both government and business operations in the process.

A Recipe for Upheaval

But perhaps even more important is the risk posed to the country's political stability. In the past, Zimbabwe’s political leaders have relied heavily on government security forces, as well as the country's army and police force, to actively repress opposition groups and protests. Yet the rank-and-file members of the security organizations may not be entirely shielded from the fallout of the country's rampant inflation. The government has bought the loyalty of higher-ranking members through budgetary prioritization, as well as corruption. Lower-ranking members and their families, however, are acutely feeling the shortages and rising food prices at home like so many Zimbabweans.

And while the country's recently announced 2020 budget heavily favors wages for security forces, the numbers are based on an extremely ambitious economic recovery. Specifically, the current budget assumes that Zimbabwe's economy will not only achieve a gross domestic product growth rate of 4.6 percent by the end of 2020, but also an inflation rate of just 2.3 percent (current month-on-month inflation rates are estimated near 100 percent).

Although ongoing and expected reform could rectify Zimbabwe’s economy in the longer term, any increased revenue from the country’s mining industry — its main source of potential relief — won’t soon materialize. The chances that the government could achieve such a colossal economic comeback on such a short time span are, therefore, next to none. Instead, the next year in Zimbabwe will most likely be marked by a continuation, and possibly exacerbation, of its financial crisis — meaning Mnangagwa will likely struggle to finance the security forces he needs to guarantee his place in power.

The country's dismal economic performance could also lead to greater fissures within his ruling Zimbabwe African National Union-Patriotic Front (ZANU-PF) party. Mnangagwa has only been in the driver’s seat since 2017, and many of the country’s financial problems are the culmination of defective policies predating his rule. But that won't keep those vying for more power within the party from using the country's current economic malaise to challenge his position.

This internal threat, along with external pressure from increasingly angry labor unions and opposition groups, could potentially spell Mnangagwa's demise in the coming year — especially if he's unable to keep the support of his security forces. His administration's longer-term efforts to stabilize the economy and attract foreign investment into the country's mining sector will likely endure with or without Mnangagwa. But a regime change still won't fix the underlying factors plaguing Zimbabwe's economy. And until its current or future leaders make that happen, the country will risk falling deeper into disarray.

As Its Economy Worsens, Zimbabwe Teeters on the Edge of Chaos is republished with the permission of Stratfor Worldview, a geopolitical intelligence and advisory firm.