It's Not Just Ukraine: Argentina Is Worsening the Global Food Crisis 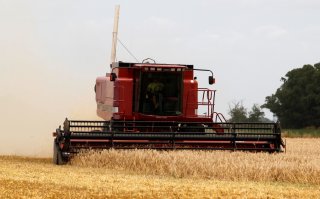 Agricultural commodity prices are soaring due to the disruptions in international trade created the Russo-Ukrainian War. Russia and Ukraine combined account for about 30 percent of global wheat exports, leading United Nations officials to warn that the war will lead to a global food crisis the likes of which we’ve not seen since World War II.

Poor countries will be hit the hardest. Many low-income African and Middle Eastern countries will sink deeper into poverty. In countries like Lebanon, Egypt, Pakistan, Libya, Tunisia, and Yemen, fear of social unrest is growing by the day.

President Joe Biden has already sounded the alarm about this food crisis and has made an international call for increased food production. That’s a call Argentina could answer if its government wasn’t getting in the way.

Argentina’s grasslands are among the most productive soils in the world. Using these fertile grounds to alleviate the looming situation for Africa and the Middle East should be a top priority both for Argentine farmers and the government. However, instead of encouraging farmers to plant more, Argentina’s government is intervening in its agricultural markets once again. In response to the sharp increase in wheat prices worldwide due to the potential lower production this season from Ukraine and Russia, the Argentine government decided to subsidize 800,000 tons of wheat from domestic mills in an effort to reduce the price of bread. This is on top of the export duties and export quotas already in place in Argentina before the war erupted, which also act as a bread subsidy because they reduce the domestic price of wheat.

While this new intervention seems small for the global wheat market, its consequences are profound. Further subsidizing the price of bread in Argentina will come at a high cost for the world at large.

First of all, the money for these subsidies has to come from somewhere. Allegedly, the government will raise export taxes again on grain exporters to pay for it. But there’s nothing keeping these companies from simply passing these increased costs down the supply chain. Ultimately, that will mean farmers are paid less for their grain. It will be farmers that bear the brunt of the cost for these new subsidies. This reduction in income will leave farmers with less money to invest in machinery, fertilizers, and technology to increase production. The impact will be felt mere months before the wheat planting date. Sadly, the result will be a considerable reduction in wheat yields in Argentina.

Argentina is also a major player in the world’s wheat market. A reduction in its yields will have a significant impact, increasing wheat prices that are already high. The country is the seventh-biggest exporter in the world, and last year its production surpassed 21 million tons. To avoid worsening the global food crisis, a reduction in yields should be offset by an increase in the planted area.

But with these new subsidies, that’s not likely to happen. Export restrictions and market interventions make it harder for farmers to assess wheat’s relative scarcity compared to other commodities since its price doesn’t reflect the market reality. In that situation, they may switch to other grains, conceivably those with less government intervention. Farmers will likely be reluctant to plant a crop whose price depends not on supply and demand but on discretionary government decisions. Just when the world needs a massive increase in production, Argentina will be shrinking total wheat output.

Conversely, the upsurge in wheat prices is already encouraging farmers to increase production in countries with less government interference. Both American and Australian farmers plan to raise wheat acreage next season. This is a clear example of how wonderfully the global price system works. Where prices are set free, they provide both a signal and an incentive for people to cooperate with one another, even though they don’t necessarily know they are doing it. Farmers in the United States and Australia may not know how dire the situation in Africa and the Middle East is. However, they are helping poor people there tremendously by producing more wheat, and they will partially alleviate their suffering. Argentina’s government should take note.

The world is at the gate of a humanitarian food crisis and an increase in food production is desperately needed. Argentina’s government is doing precisely the opposite of what is required by meddling in its domestic wheat market. Subsidizing the price of bread in Argentina will force a reduction in yields and the overall production of wheat, worsening the upcoming catastrophic situation. The government should refrain from interfering in the wheat market and leave Argentine farmers alone to do what they do best: feed both Argentina and the entire world.

Agustin Forzani is an MA in economics from George Mason University. He has been published in National Review, Washington Examiner, Inside Sources, Discourse Magazine, and Global Trade Magazine. Twitter: @agustinforzani